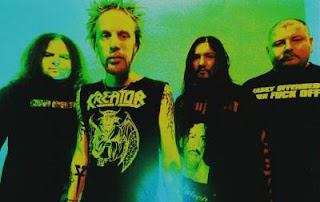 Question: Does a band members previous bands affect a label's wanting to sign them? I'll give a make belive example hypothetically if people like say mick harris, bill steer, paul catten and danny from brutal truth were to form a a grindcore supergroup ( giving ludicrus example to make a point) would said super group be more likely to be signed than a band who's members have no track record? From:


Answer: I think the hypothetical band you describe already sorta exists dude- Brujeria, Lock up and Venomous Concept are all bands boasting all-star line ups, usually centered around the undisputed 'project-king', Shane Embury. Earache hasn't signed any of them, mainly because in most cases the members were already signed and recorded great, often classic albums for the label back in the day, and I just don't see how a mere project could top the material that the musicians already did in the past. They seem a bit artificial to me.

The scene is in the midst of a rash of project bands and even worse, short-lived one-night-only, all-star jam-bands. Tickets are already available for the Nuclear Blast All-Stars Winter Spectacular, maybe in the future you can turn up to see the Roadrunner United Globetrotters On Ice.

These abominations are breaking out everywhere, and I am highly dubious about the motivations of some of those bands. I reckon musicians form projects because they simply crave the stage. It's so that when their main outfit is off the touring circuit between albums, they can leverage their fame to entice festival promotors to book them to play festivals every year, instead of say every 3 years.

Shane Embury certainly doesnt deserve any criticism tho, his intentions have always been purely music-motivated, its bands like Them Crooked Vultures and Chickenfoot I object to. Anything that involves Flea is automatically crap.

I fully expect a good portion of the billing of major festivals in the future to be made up of project bands. Promotors can't resist the lure of a once-only experience.It's all the fans' fault really, they lap up the chance to see 4 famous faces onstage for the price of one.

As a record company we try to produce ground-breaking, genre-defining albums, we dont run a festival or have to sell tickets for a 3-day event in a field, so from my perspective projects are uninteresting, we'd rather invest in new bands with a vision and a hunger to succeed.
Posted by Digby at 11:15 PM

Apart from rubbish, what would you call a band like Meathook Seed?

As a lot of people are probably thinking, how do you feel about "Bloodbath" then? They have more merit as a real band than a "Supergroup" but they are often hailed in this manner.