Hi, I have some questions... 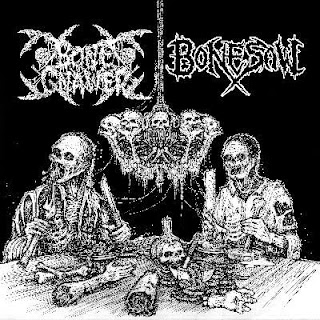 Question: Hi I have some questions for dig. I‚m probably using up my quota.

(1 what do you think of the sub-genre of progressive extreme metal (its pretty obscure, but artists include Xerath, Animals as Leaders, Tesseract, Fellsilent, Cloudkicker, and Vildhjarta)

(2 In recent years Britain has gained two festivals that passionate about extreme music in the shape of Bloodstock Open Air and Damnation. What sort of impact on the UK extreme music scene have these festivals had do you think and have you been to either of them yourself

(3 I heard a rumour that Mistress left Earache on very bad terms, is there any truth to this?

(4 what do you make of the newish Aberdeen retro-death metal band Bonesaw. (They‚ve recently released splits with Abcess and Kam Lee‚s new band Bone Gnawer). I know you don‚t think the retro styled death metal acts are right for Earache as they don‚t match up to Earaches rich legacy in Death Metal, but you also said you signed bands such as Cauldron and White Wizzard as although they weren‚t doing anything new they were capturing the spirit of NWOBHM in a way no one else was doing at the moment. I feel the same is true of Bonesaw as no one else is capturing that Autopsy/Confessor/Necrophagia/Cianide sort of feel at the moment


Answer: Wow, 4 questions for the price of one? We must be having a weekend sale on.To answer your questions: Xerath are alright, I would'nt have signed them myself, but if you are talking proggy-extreme-Metal then OPETH are undoubtedly the kings of it, and rightly so. Tesseract and Cloud Kicker are decent bands, they probably both deserve to be signed, but not by Earache at this present time.

From my perspective, the tag "Progressive" is added by a lot of new bands who sense they are somehow better on their instruments than others, and have a weakness for long, meandering songs which supposedly show off this great talent. Personally speaking, I favour listening to aggressive music which attacks the listener,cos my attention span is miniscule. I simply dont have the patience to properly appreciate 7 minute epics which are designed to impress the listener with their virtuoso playing, or take the listener floating off into space or whatever. When we did the Elitist sub-label many moons ago, we had two proggy-type bands - Wolverine and Frantic Bleep but neither caught on.

UK metal Festivals? Yeah I was there dude when they both opened their doors. Bloodstock 01 was originally an indoor all-dayer fest held at Assembly Rooms, Derby- I've got the T-shirt to prove it. Did you know the name BLOODSTOCK was coined by Martin Walkyier of Sabbat? He was in the pub talking to the promotor (Vince) trying to think up a catchy name- Martin has a creative mind, and is brilliant at word-play. So as a take on the famous US Woodstock festival - he simply blurted out the name "Bloodstock", and it stuck.

You have to remember in 2001, Nu Metal- like Korn/Bizkit- was all the rage at the time but Vince was brave, or stupid, enough to attempt to hold a traditional-metal themed Festival. Saxon, Skyclad, Primal Fear, Blaze, Return To the Sabbat played the main stage and the likes of Occupational Hazard, Freebase, Area 54 played the Darwin suite.The folks behind Wacken in Germany kindly offered Vince guidance and provided him access to funds and contacts with bands. Fair play to him, the festival was an instant success and within a few years moved outdoors and was eventually sold to the Kilimanjaro group, a major concert promotor which is responsible for Sonisphere etc.

Mistress? Well I guess not many bands are happy to be dropped after having just 1 new album released by a label. To be fair, it wasn't all the bands fault, as during the period 2004-5 Earache had licensed too many bands and albums. We had 4 sub-labels on the go and tons of new bands, I remember we had something like 44 albums that year, when usually its more like 15-20. We had bitten off more than we could handle.

I remember the press reaction to, and eventual sales of Mistress' 'In Disgust We Trust' were poor, so we kind of lost interest really. This was compounded by the fact we'd also bought out Mistress' 2 prior albums obtained from their first label Codebreaker, the sales of which were even worse. One of the album masters had an audible glitch which meant the entire pressing was shelved. It appeared the band were cursed with awful bad luck, much like their heroes Iron Monkey before them. Mistress' members also played in Anaal Nathrakh and the various projects revolving around the prolific and talented Mick Kenny,so its fair to say they lacked 100% focus on Mistress themselves. 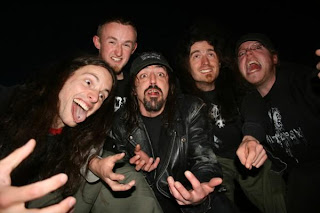 As for Bonesaw? They're alright I suppose, the band seem to have great connections with the old school DM veterans, sharing a split LP with Kam Lee's Bone Gnawer and commissioning art by Chris Reifert (Autopsy) is no mean feat.
Posted by Digby at 12:20 AM