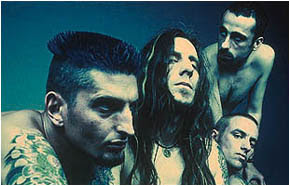 Thats what i call hitting the self destruct. I've been waiting 10 years for the answer to that question. Shame. They were talented. There debut album blew me away. What were they thinking:(

I think you will find that Pulkas were, possibly, thinking "what have we done, signing to Earache".

was down for this band right when Greed came out, but then i wouldnt hear about em again. shame. i still listen to this now and then, and everytime it becomes a bit of a 'problem', with me having to listen to it for a coupla weeks in a row. i too think this album could've been released the past month. still as good to go as back in 98. cheers

THAT VIDEO SUCKS BALLS AND THEY WERE OBVIOUSLY DICKHEADS SO BIG LOSS THERE HMM? OR NOT.

This is one of the great albums of the era. It's a shame they did not do anything else.

i found them when i bought a six cd boxed set of metal bands from hmv. its called metal: a headbanger's companion. their song rubber room was on it. and the set was released in 2007 i think. so that might be a little reason why theyre getting some attention now?

I saw then at Rock City Nottingham, it was rammed and they were awesome :)

One of my old bands supported them and they were fantastic guys, one of them even said we were going to be famous one day. That never happened.