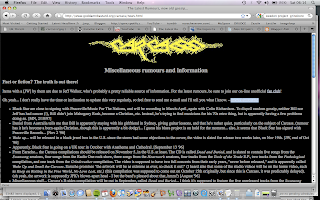 Question: Whilst browsing the internet, I found a website which acted as a sort of unofficial fan club for Carcass back in the days of Heartwork/Swansong and was regularly updated with tidbits of information about what was happening in Carcassland as it happened. However, seeing as this was 15 years ago and the internet was not so widespread, the stuff is based mainly on word-of-mouth and small magazine snippets, so it's not the most reliable source ever. However, one thing which struck me was an entry from May '96 which said that Michael Amott had reformed Carnage. Obviously, there is no recorded output form this era, but I just wondered if you knew anything about this short-lived Reunion? Do you know if this is true, and if there was any live shows or even any rehearsals?
Also, can you vouch as to how much of the stuff on this website is true?
The Carcass website can be found here:
http://www.goddamnbastard.org/carcass/news.html From:


Answer: I know your question is about Carcass dude, but let me digress a little, because this question is pretty fascinating for me, it gave me deja-vu.You have to remember this website dates from the Jurassic period of the internet.1994-5 makes it, in internet-time, a prehistoric time capsule preserved in amber.I don't know if 'Web Archeaology' exists as a scientific discipline yet but it should do as you can unearth a lot of gems of information from the past by using Waybackmachine or internet archive.

The whole WWW was a brand new thing in 1994-5 and it was a truly wonderous time to be online, but its full life-changing power was certainly not apparent yet, mainly due to the severely slow dial-up speed of the early modems and phone lines, not to mention the outrageous price plans the telcos charged the public for internet access.Plus, when you went online back then it was a barely tolerable experience, there was no web-browser apart from the primitive Mosaic, and the scarcity of websites dealing with metal music meant it was a serious headache to unearth the slightest bit of band info from the web.

Back then, a lot of people were actually 'on the 'net' but nearly all of us non students paid to go through commercial ISPs like AOL or Prodigy, so we were restricted to text based communications - such as email, internet-relay chats (IRC's) and alt.newsgroups (primitive forerunner of message boards).

1995 was the year the web as we know it broke out of being mainly the domain of computer programmers and students on campus at universities which had free and super-fast access to the server hubs .It became a public phenomenon with the release of the first commercial graphical web browser, Netscape Navigator.

I distinctly remember loading up Netscape Navigator 1.0 and viewing my first webpages with- get this- actual images loading within the page.Amazing. After looking up footy scores, obviously, my second look up would be metal.In this early era of the 'net there was no such thing as a search-engine, Alta Vista had yet to come online, and Google could not even be imagined, so you had to navigate via the kindness other sites which would commonly provide a page of relevant links to send you on your way.Our earache.com site still has such a links page which dates back from that era.

For a laugh, the designers of Netscape coded their personal web pages into the software as an easter-egg,one of the designers Jamie Zawinski had a webpage which linked to many music/metal related pages, so this became my homepage for many years.And this page was linked a couple of clicks away, so I used to view it all the time myself at the time.

Sorry for the digression and trip down memory lane- I used to have bookmarked this very same page back in the day,it was a serious beacon of info in an otherwise dark internet, I used to refer to it all the time, seeing it again for the first time in a decade was cool.

From my perspective it dates from a time when Carcass were estranged from this label.They had recently signed to Columbia records/Sony after 4 albums on Earache so we were no longer part of their career plans.Earache dealt with the band on a daily basis for like 6 years straight, then all of as sudden we were history and shut out.

Hence, I actually viewed this very same site myself for info about their activities. It certainly was gossip/rumour-based, as all information seemed to be then,but it declares its rumour-mongering sources quite clearly at the top, so you know what you are getting.Most of it is exactly that- rumour- but I do know the comment about The JFK head is wrong- because it was Jeff Walkers idea to use it for the cover of the album made up of leftover songs from the Swansong sessions, not ours.

I for one am glad it exists and serves as an archealogical fan page of a certain bygone era of one of Death Metal's most significant bands, it remains a useful reference tool as a window into how fan pages looked on the web, in the mid-90s.
Posted by Digby at 10:10 PM

Quote of the year.

I used to tape trade with Matthew Holliman back around '95. He's a very nice guy and also a good guitar player! He used to go to pain-staking lengths to make nice covers for the Carcass bootleg compilation tapes he'd done up. Great guy!
I am actually the "Daniel" in the second post down in the rumours section. Funnily enough, Jeff Walker mentioned the "Born Again Christian" rumour when Carcass played in Australia last year! The part about Bill living in Sydney was certainly correct, but I never did find out if he'd realy given any guitar lessons. Some "Student" of his was also selling a Steer-signed Peavy 5150 head back around that point.

One more thing about the original post-
Michael Amott went back to Sweden to form Arch Enemy with (original Carnage member) Johan Liiva .... so that's probably where that rumour started. The band probably didn't have a name in that embyonic stage, I guess.