Does anyone make a living playing grindcore? 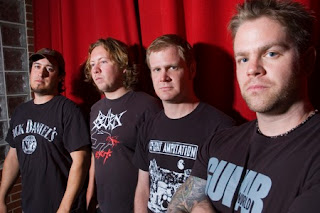 Question: This question is based on an interview i read with pig destroyer, in which they said that the main reason why they dont tour much is because of the style of music they play pig destroyer doesnt pay the bills, so therefore they have to have day jobs. Im just curious as to how when one of the bigger bands of the grindcore scene struggles balancing the band and also a personal life. how labels can demand that they spend all their time on the road surely its a catch 22 situation? surely by keeping bands out on the road they are actually encouraging and accelerating that band splitting up being as bandmembers being frustrated with having a lack of money is one of the main reasons for band break ups? From:


Answer: Regular readers of this blog will know I constantly bang on about how only those bands which heavily dedicate their time, energy and money into touring, are the ones who eventually will succeed in making a living from the metal industry. It's not an opinion, its a cast iron fact, but its a statement which is usually met with the "look at Darkthrone or Burzum" retort- I tried to answer that one here, and i'm still waiting for you blogonauts to give me names of any other examples of bands who made it without touring.There are none.

Pig Destroyer are a classic case of a band that has other options in life, and chose them over touring their music- I believe mainman Scott Hull holds down a lucrative job as a computer programmer at the Pentagon, or some government department in Washington, D.C. Playing in a band is secondary to that, which is fair enough,I'm not going to criticise his choice.The end result is I suppose Pig Destroyer could be described as the worlds most well-known grindcore hobby band.I've never seen them play live for instance, which is odd.

It's true that grindcore is not a massive selling genre, I'm fairly sure that the only grindcore band making a living from their music is Napalm Death, they have been lucky enough to be living off the band for at least two decades now and the reason they have done it is by a constant, gruelling touring schedule. Shane Embury once told me that he spent over 250 days in one calendar year on the road, that is considered a normal touring cycle for a top level metal band with a newly released album on sale. In other 'off years' it might be around 100 shows, never less than 60.

I have dealt with quite a few bands whose members simply had no other life-options, you'd be suprised how many of the biggest metal stars grew up in very poor family situations, bordering on poverty. Their skill was their chosen instrument and their motivation to succeed was to simply break out of the poverty trap life dealt them. Getting in the van and criss-crossing Australia was no hardship for AC/DC members because the alternative of staying at home was far worse. Read Ozzy's autobiography if you want further evidence.

Metal bands differ greatly in their earning powers. At the top end of the scale, only 5 metal bands are considered of a huge enough stature and reliable ticket-selling power to build festivals around them: Black Sabbath, AC/DC, Kiss, Metallica, and lately I beleive Iron Maiden joined this illustrious club. Being just a handful of acts means they can command enormous sums to perform, over $500,000 per gig is common, but its not all profit as the bands bring an enormous crew and stage set with them. Lately these stellar names in metal make sure the whole festival is in their control, and it is often arranged around the headliner- examples are Ozzfest or Sonisphere -It's so that the lucrative festival sponsorships, branding, and tie-ins can be profited from by the main act aswell.

Bands from the next level of metal's heirarchy- Slipknot, System of a Down, etc take advantage of the lucrative EU festival circuit to play to as many people as possible in a series of weekends over the summer. Metal festivals in the 90s numbered about 5, most were on and off events, nowadays there are over 40 important metal festivals in EU alone, not to mention more in Australia and Japan. Those promoters are arguably the most important people in the metal industry at present.

Bands which put in the best performances in front of the huge festival crowds can now play maybe 25 EU festivals in one summer over 12 weekends,sometimes bands will play Friday at one festival and Saturday at another. The irony is of course that those 'festival fave' bands only got to be that way due to the constant touring during the early days.
Posted by Digby at 10:46 AM

it doesnt appear my last messaged sent so i'll make the point again sorry if any duplicates.

im gunna say what about ulver? they didnt tour reguarly and made it which is why people are paying so much to see them now. Also from what i remember the ulver side project head control system charted without ever playing a show.

Maybe Bathory played only a few early shows and Rhapsody never played live befeore the release of their first 2 albums which sold about 250,000.
Still very few bands do.

The reason Ulver made such a name from themselves was via their BM incarnation which did play live frequently.

Oh, and Bathory never played live at all.