Is Age a Factor in Getting Signed? 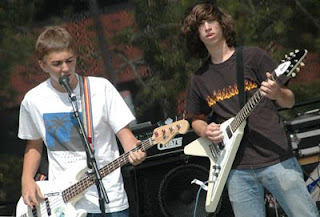 Question: I was just wondering how much youth matters to you at Earache? Are you more likely to sign a band if they are techincally competent but are all teenagers over a similar band aged 5 or ten years older?

I was just wondering your opinion, and how important/how big an advantage you think youth can be in the extreme metal scene of today!

I asked because you have quite a lot of younger bands on your label (Oceano, TBWD, Ignominious Incarceration) who are all amazing, but did their youth sway you towards signing them over someone else? Or is it as simple as because they are younger they have more drive and passion and are generally more likely to succeed and be noticed!

Answer:In the battle of Youth vs Experience, youth wins every time. Youthfulness is a prized asset in all the creative arts- be it music, fashion, art, film etc, though I doubt age matters much in say, novel writing -look at JK Rowling for proof.

I should say that Earache has no signing policy based on the ages of the members, we actually don't even ask the ages of any bands we're talking to, that would be rude.Anyway, Earache signs bands strictly on the quality of their music so age doesn't matter- however, since we are usually in the market for very fresh-sounding bands playing what we feel is the most contemporary styles of metal/rock, it tends to be the younger bands who fit the bill. There are plenty of late 30 year olds playing Death Metal, but no late 30 year olds playing Deathcore, for instance.

It definitely appears there is golden age group when bands who's members are of a certain age range seem more likely to succeed, and become popular. Bands that are around ages 18-25 do the best,but even this age range is falling rapidly as many youngsters are getting better at their instruments, way earlier than before.

Maybe its to do with the uptake of guitar based video games and availability of instructional videos.Instructional DVDs where legendary rock musicians pass on their wisdom and experience to fans are massively popular- Derek Roddy's own instructional drum technique DVDs actually outsell his one-time band mates Hate Eternal DVDs by a wide margin.

Mostly the popularity of younger acts is just to do with the sheer exhuberence of youth, and the peer-group connection with kids who actually go to shows and consume most music - these are of the same age group and so can relate better to bands their age.

Younger bands do have some downsides, inexperience obviously being the main one.We've had our share of greenhorns on the label, most young bands are pretty naive about what a music career involves. Many have a simplistic view of the music industry- ie, band writes some songs in the rehearsal room, songs put on the internet or CD, do a few shows, then stardom and fame follows, as easily as night follows day.Wow, I wish it was that simple! That's one of the reasons I write this blog, to try to give some pointers to upcoming bands about what a music career is like- this blog is written from hard-bitten experience.

For many bands on this label success often dropped into their lap so doesn't "seem real" to them. If you read ex-Napalm Death or ex-At The Gates members' retrospective interviews, they usually confide that they were young and stupid when they quit or split from the bands when a highly successful career was imminent. Young bands do the dumbest things, they simply don't have the depths of emotions to deal with seemingly trivial shit which older, wiser heads can shrug off.

Parental pressure to continue at college or get a "real job" is a major concern with our younger bands. Liam the guitarist and leader of UK noiseniks The Boy Will Drown is currently completing a University course.Its no big deal for him, yet it subconsciously affects their touring schedule, the proof is in the fact they have yet to complete a major comprehensive touring stint.

Older bands - with members say past late 20's, early 30's- are wiser, they certainly known how the industry works, but they come with different baggage. Often they have other life choices, a steady paying job or relationship is most common, so getting in the van for 2-3 months playing music on tour in far flung places is not as attractive a proposition as it is to an 18 yr old with no ties.

Then there are the veterans. Earache doesn't tend to sign very many veteran bands - by that I mean those 70s or 80s era metal bands who are still going, and come with a ready-made and loyal fanbase built up over decades of touring with plentiful albums in their back catalogue.

New upcoming bands should take at look at the punishing work ethic of bands like Metallica, and AC/DC who are now aged in their 50s.Already immensely popular and among the worlds biggest selling metal bands, I bet they have played more concerts this year than most other acts half their ages.

Killer guitarists are becoming ever younger- but Tallan Latz is beyond belief.He is maybe the world's best guitar prodigy.

I look at the promo interview vid that earache put out for the stench of redemption when you talk about age and bands. The bit where jack owens talks about how the band were in and out of the studio quickly with no drama because they were all veterans.

What an adorable, talented kid. I hope he goes far. Thanks for posting that video, it made my day.