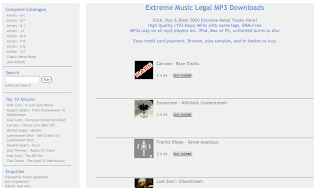 Question: Hello there at Earache,

I have two questions. First, is your Classic Series solely a European offering? I can\'t seem to find the Hate Eternal one in the US webstore.

Answer: 2 questions for the price of one- it must be our january sale offer.Our 'Classic Series' of legendary early Earache Cds with FREE bonus DVD has been really well received by fans and we love revisiting our old catalog and in many cases introducing new fans to them.The Hate Eternal offering is basically I, Monarch CD packaged with the Perilous Fight DVD (which disappeared without trace on its original release) and will soon be available for purchase on USA webstore, a few weeks after the UK/Eurostore. Typically the delay between our UK & USA release dates is due to a quirk of our manufacturing plants- they simply print & ship faster in UK than USA, where our distro picks up the tab, which delays the process.

As for metaltracks.com, it was launched in Jan 2005 and was Earache's own Mp3 download site with pretty much the complete label catalog for sale, something like 4000 tracks,all DRM-free, and reasonably priced, high quality files.Launched without much fanfare the success of the site really surprised us, fans told us it worked a treat- it was pretty much like how amazonmp3 works now- but behind the scenes it was pretty homebrew.We coded it ourselves and we have some immensely talented folks working here, but at the end of the day, we are music fans not website developers.This proved to be its downfall. Our server couldnt scale up to meet demand meaning the site went down a lot, and basic security flaws meant the site was easily open to hackers.In summer 2007 we discovered a Chinese Ip adress had penetrated the database to steal the entire contents and kill it dead- 6000 mps in one session is quite an attractive "honeypot" it seems.It remains a dead site ever since.

It was a succesful site while it lasted and gave us a steep learning curve and some harsh lessons about how some fans want to obtain music in the 'digital space'- ie they want it free.In the 4 years since launch have watched Myspace come to prominence by streaming free music, downloading it seems so old school now, so we'd consider it a backward step to reactivate the site.We do have some vague plans to once again offer Earache's music as free streams but we'd let professionals do the coding next time.
Posted by Digby at 1:28 AM

Wow, thanks for the quick reply and thorough answers! I've wondered for quite a while about what happened to metaltracks.