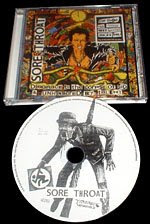 Question: Any possibility of reissues of the likes of Sore Throat and Filthy Christians? I note both have albums in Terrorizer\'s essential European grind records but their Earache albums have been out of print for years... From:


Answer: I can't see us doing those titles again..both have been out of print for almost 2 decades, due to threadbare interest or demand.Sore Throat was never on CD at the time, but our friends at Disk Union in Tokyo sold a special 153 Track version of the CD (with unreleased rare first album Unhindered By Talent) about a year ago.Seeing those releases in Terrorizer's poll raised a few eyebrows round here, for sure.
A simple Top 20 doesn't really give the reader any sense of the massively dis-proportional impact that each of the albums had - I mean the difference between the historical importance of say Scum and Mean is so vast, its silly to even compare them.The difference in sales at the time, was equally vast too.

One thing that bugs me nowadays, is the online histories of all bands of the past now have to run through the distorting lens of wikipedia. Wikis are a great leveller of information,but in any music scene you care to mention, you can guarantee that one or two bands were incredible, and the rest were basically also-rans.Its rare that writers point this out.
A great example might be the Seattle Grunge scene from the early 90's, which congregated around the Sub Pop label.Its frankly annoying to read that Mudhoney were responsible for Grunge, as their 7inch predated Nirvana's by 6 months, which even if factually correct, fails to address that Mudhoney were a strictly second division band compared to the stellar trailblazing impact made by Nirvana. In a similar way, just seeing Tad in lists of the originators and prime-movers of Grunge scene irks me- they were a strictly third division outfit at best, and barely even deserve to get a mention in the same paragraph as Nirvana.
Posted by Digby at 11:52 AM

Just a coment on the Sub Pop example...

I'd argue that circa 1989 Mudhoney were a far better band then Bleach era Nirvana. They were more of a second tier band like Tad, better then the schlock of Blood Circus or Fluid or Cat Butt, but nowhere near the brilliance of "Touch Me I'm Sick", "Need", or "In and Out of Grace".

Don't get me wrong, in the long run Nirvana were the far better band, but when Nevermind came along they were dealing with big league dross like Pearl Jam while Mudhoney kinda petered into patchy mediocrity (kind of like a garage rock version of Dinosaur Jr in that regard.)

In that scene, at that time, Mudhoney were THE band, I think you're selling them a little short. Nirvana were always much better as a mainstream rock band then in an indie context anyway.

Keep up the good work, it's always interesting to read this blog.

The Damned invented punk as the single NEAT NEAT NEAT was before The SEX PISTOLS Anarchy single.