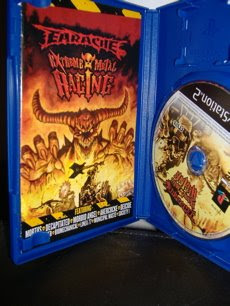 Hi Earache,
My brother gave me the Extreme Metal Racing Game which is in the box of Worlwide metal.It is a fun racer, which was enjoyable.I'd like to know how did Earache make such a game, because I programme my own games.
from: jamesmobrey54@hotmail.com

Answer: yeah glad you liked it- Earache is still the first Metal label with its own themed Video Game out.It was originally released on PS2 in 2007 in the UK- now we decided to make the full game available to more fans across the world, as a FREE PC game, and its included in our hella mega value Boxset "WORLDWIDE METAL".
The game came about because the daughter of a head of a smallish UK Games developer (Data Design)is a huge Earache fan, and she 'advised' her dad to contact us to make a game. I think you summed it up well- the gameplay is definately not GTA or anything- its simply a fun-racer type of game, albeit with a soundtrack of hours of Death Metal and Grindcore.You can drive vehicles around a number of tracks and kill your opponents with various weapons.STOP PRESS: a selection of Earache's tracks are included in upcoming GTA4 new episodes as DLC.
See video here: