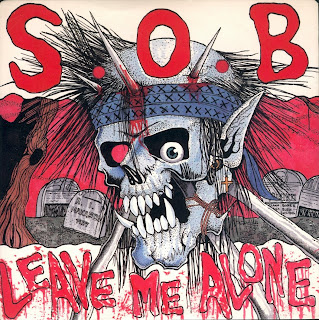 Question: So how close were earache to signing SOB before the incident with their singer occured? Is this part of the reason why none of the premier grind bands so often name dropped by lee dorrian( i seem to recall lee being heavily into grind/d beat band disclose) and shane embury never appeared on earache? From:


Answer: The UK grindcore scene owes a huge debt to the early 80s Uk Hardcore Punk scene which predated it, this fact is often overlooked by wikipedians, or perhaps because the connection is so obvious, it goes without saying.Either way, its worth emphasising- bands like Discharge, and the more extreme variants like Chaos UK and Disorder were half of the blueprint for the Earache-led wave of grindcore acts which followed.But the other vital ingredient in the Grind hybrid was the power of metal riffs and solos.Looking back, this ingredient was blatantly missing from those 80s HC bands, and is really the difference between the scenes.HC punk = HC punk. Metal = Metal, but HC punk + metal mixed and put thru the Mick Harris accelerator = Grindcore.

During the 80s Chaos UK in particular would tour Japan a lot,becoming absolute heroes there, and tons of HC punk bands formed in their wake, apeing the Chaos UK style, and a few took things even further and made it more chaotic, more extreme, Swankys, Gauze etc. SOB wasn't grindcore, just super speedy HC punk band, but when I copied the first EP for the Napalm Death guys it became an instant fave.Lee Dorrian in particular was in awe of the band and became firm friends with them, his fledgling Rise Above label was a hobby, so he could put out a SOB/Napalm Split 7inch for fun.Whereas, even in the early stages Earache had much more serious concerns and ambition, I wanted the labels output to break with the HC punk tradition, plus I was dedicated to building solid careers for the bands I signed. Actually it took the Earache musicians themselves a few years to get this fact about the label- many of them quit-including Lee himself, because a long term career playing grindcore seemed absolutely unthinkable in 1987-1988 or so.
I loved SOB's music, but lack of finances forced me to spend a long time considering pros and cons of every act to be signed. Questions like: how could a Japanese band tour Europe? how could it be financed? Those kinda questions were a major consideration for me.Hence I never approached SOB about a deal.

Heres SOB when they were HC