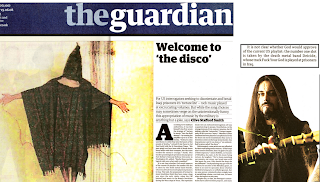 Question: Is it true that Deicide was used to torture prisoners in Iraq? from :

Answer: Hold on there dude, Deicide has never tortured anyone -well, anyone cept thier own fans anyways!
You are referring to a news item which originally hit the wires early last year on a website MOTHER JONES which claimed that US military was using audio at loud volume to 'soften" up detainees in Abu Ghraib- it even had a playlist of the top 10 songs. Deicide's "Fuck Your God" was number 1.
Never slow to shirk from stirring up controversy, Earaches press dept quickly released a Press Release to alert the music press to this "fact".As it happens Deicide drummer Steve Asheim comes from a family with a long Military tradition, so he was all in favor of the use of the music.No one ever checked if the story is true or not.
The story quickly snowballed online and even ended up reported as fact in the UK newspaper The Guardian.
Posted by Digby at 1:43 AM

cerpintor said...
This comment has been removed by the author.
5:35 AM

Two things about this seem a bit off to me, regardless of the story being true or not.

Firstly, earache's press department is willing to use the activities at Abu Ghraib, such as "sleep deprivation and interrogation disorientation" (http://earachenews.blogspot.com/search?q=u.s.+troops), to promote one of their releases, potentially profiting from these activities. So does earache support the use of torture and absence of human rights at Abu Ghraib or only when they can turn a profit from it?

Secondly, Steve Asheim's unashamed support of the supposed use of his music in this way. Equating the facilitation of torture with "doing our part for the troops." is fundamentally flawed, I'm pretty sure he wouldn't be spouting the state propaganda line if Deicide's music had been reported to have been used by the "enemy" in torturing US troops. Supporting the troops and supporting the use of torture are not mutually exclusive, and having a family history of involvement in the army has fuck all to do with it. You seem to think it does though, "Steve Asheim comes from a family with a long Military tradition, so he was all in favor of the use of the music". Surely a better way to help the troops would be to help them get out of the situation they are in, where they're sent away from their families and homes, told to kill maim and torture, and face death, injury and lifelong disability at the whim of and to line the pockets of the ruling classes.

The band torture their fans who have to listen to their unholy distorted shitty Cds.
A pathetic music by stupid ignorant band for stupid ignorant fans
they are a joke.
!!hurls shoe!!