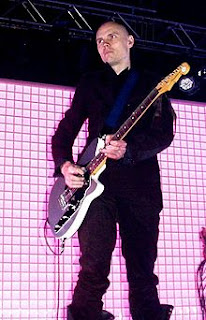 Question: You have said before about earache nearly signing nirvana, did you have any interest in any of the other grunge bands? The one i can think of with the closest link to earache is smashing pumpkins being as billy corgan was friends with the guys from morbid angel and always praised trey highly as one of his favriote guitar players in interviews. From:


Answer: This idea that Billy Corgan is a massive Morbid Angel fan crops up from time to time, and in my best mythbusters TV show fashion i have to say: "this one's busted dude".
As far as I can tell from Smashing Pumpkins wikipedia (which is far from the truth in many cases, judging from my own wiki entry!)- yes Billy does express his love for Heavy Metal and the heavier end of the spectrum at that, but I've never once heard of Morbid Angel being connected to this.
Plenty of big acts do love Morbid Angel though- Korn and Slipknot have been seen wearing the shirts, and we are aware of the long-persisting rumour that Korn recorded a cover of Morbid's God OF Emptiness song, but there's never been any official record of its existance.
Posted by Digby at 7:45 AM