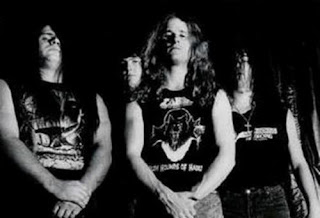 Question: I wonder which authorship organization is minding the songs on Massacre\'s \"From Beyond\" album. The reason: one of my bands, Thanatos, will cover \"Dawn of Eternity\" on their forthcoming album. I\'ve cleared things with my local rights management organization, but I\'d like to double check that things went the way they\'re supposed to from the other angle. Since this is the first time I actuallly am dealing with cover songs, I need to make 110% sure that I\'m in the clear. From: Gerard@deitydownrecords.com


Answer: Great choice of cover!You don't normally need direct permission to cover a song but you came to the right place for info- its owned by my song publishing company EARACHE SONGS. You simply have to credit the writers as Rozz/Lee and acknowledge the song is a Massacre original, published by EARACHE SONGS/ MCPS on any paperwork you submit to the presing plant/record comnpany.
As for collecting money, if you have contacted and cleared things with the rights organisation (STEMRA?) then they will contact Earaches rights organisation (MCPS/PRS in UK) to ask you to pay. How much you pay depends where the record is printed-its typically 8.5 cents for a song, thats in USA rates (ASCAP) or UK rates are 8.5% of the dealer price of the album, divided by number of songs included.If you pressed a 1000 Cds - we'd get 85 bucks less their fee = $70 thereabouts- we'd get it in maybe 18 months after you paid it to Stemra- because those organisations are slow as hell. But thanks for checking.
I wish you luck with the THANATOS album.
Posted by Digby at 2:01 AM