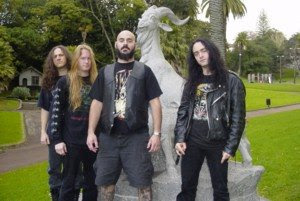 Question: In the last issue of Decibel magazine, the one with Darkthrone on the cover, was a feature on Incantation\'s \"Onward To Golgotha\" album being put in their magazine\'s hall of fame. In it, it was mentioned they were turned down by many labels, Earache being one of them. I\'m wondering if you now regret this. I can see why you may not have signed them at first, their demos and early 7\"\'s are good, but not as good as what would come, as Onward to Golgotha came out to be a fan favorite, a classic, and a unique benchmark in death metal history; as would the band itself despite numerous line-up changes. From: marcusj33@verizon.net


Answer: Earache was fuckin snobby about music back then, still is in fact, I thought we had the best bands in the scene at the time, and Incantation didn't quite cut it, but this was a snap decision made at the time, probably on a quick listen to their first demo tape.

Looking back, its quite remarkable how we never signed a single one of the entire NYDM scene bands, I recall that I preferred DM bands with extreme drum speeds and nearly all our bands of the era had truly exceptional world class drummers, whereas most if not all of the North Eastern US area bands were ropey when they attempted higher speed, their natural pace was more mid-paced and gutteral.

The fledgling Relapse label did a fine job of picking up many of the North eastern area acts,as they were local to them. Incantation didnt properly hit their stride till 1992, which made them part of the chasing pack of latecomers by comparison to Earache & Roadrunners first wave of Death Metal acts, many of which were already charting and selling tons of records by that time.

Listening back to NYDM now, the drumming on Incantation still sounds ropey to my -admittedly shot-thru - ears, but I now really appreciate the gutteral vokills, in many ways they were trailblazing this style of vokill, and its probably the most recognisable trait that todays newer DM fans associate with the genre, thats why bands like Suffocation are winning the long overdue respect of masses of the younger fans I guess.

I answered a similar question a while back about another 90s North eastern DM band- Immolation.