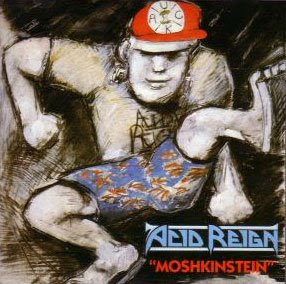 Question: I heard a rumour earache have purchased the rights to re-release Acid Reign\'s fear and moshkinstien albums. As much i want it to be true i doubt it. Good idea though nudge nudge wink wink . TA keep up the good volume!!!! From: jhnstcrr@aol.com


Answer:yeah Acid Reign were actually damn great, and are an under-appreciated band fron the original UK thrash era 85-89 or so.In fact, several of the ex-members went onto record for Earache as cathedral and lawnmower deth in the 90's.BUt as for us doing a re-issue, we dont own the rights, thats MFN, and its highly unlikely they can be bothered as the label folded a few years back, i think its part of Sony/BMG now.
Posted by Digby at 3:24 AM