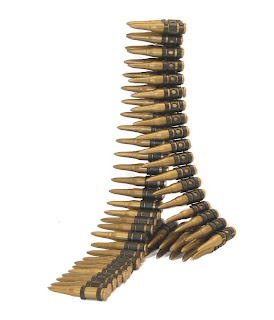 Question: Dig, simple question, I just would like to know why you gave David Vincent a bullet belt when he signed with you in 1989. He recently was arrested for having the belt in Italy, have you read? From:

Answer: Yeah I read that story too...its crazy what you have to do at airports these days.Post 9/11 the list of things you cant take on a plane is huge now, and really annoying- no liquids at all, not even water, no razor blades, no scissors, and certainly no bullet belts.Fair play to David for sticking to his Metal fashion credentials, but I guess he forgot how officious the airport security folks can be these days, especially in Europe.
Modern Irish thrashers Gama Bomb wear bullet belts all the time, and even have a song named in honor to the metalhead's favourite accessory, but they too have abandoned travelling with them now - Bullet Belts cause too much hassle at security borders/airports/ferry ports etc to be worth the effort.I guess the peabrained security assume cos you have some bullets around your waist, you also have a gun too! Dimwits!

To answer your question, yeah, back in the late 80s when I signed Morbid Angel, my label was hardly anything, it had barely released 6 or 7 titles in the UK, and though the early bands like Napalm Death & Carcass were appreciated in the Hc/metal underground, Earache had little distribution outside UK.
At the same time, Morbid Angel were a talented young death metal band based out of Tampa, in Florida.The band had a well-received demo tape which was a must-have on the underground metal tape-traders circuit (much like Mp3 download/swapping now) but no actual album out, which was odd given their underground hero status.Turns out they were being picky about which label they would sign too, having turned down several offers before mine.It was a breakthrough moment when Morbid Angel agreed to sign for the first time to Earache- (they subsequently signed/extended 2 more times during the 90's), it set the label on course to become pretty established, and within 4 years of signing to Earache, Morbid Angel themselves became the first death metal act to ink a major label record deal- with Giant/Warners.

Of course none of us knew this would happen at the time,so in hindsight, when I flew over to Tampa in 89 to meet the band and oversee the recording of the debut album - my first time ever on a plane actually-it was an auspicious meeting of similar 'extreme minds'.I remember Trey's mind was blown when I showed him the Carcass debut LP- he was fascinated and impressed that a label could have the balls to release an LP with such extremely gory artwork-he told me he liked how Earache would not attempt to censor or tone down his art, because Morbid Angel's music and satanic lyrical stance was considered highly 'out there' by other, more established labels of the period ,like NYC's Combat Records, the label which did Death's late 80s LPs for instance.

One thing I noticed about the band was how dedicated they were- living together in a tumbledown house which they shared with a few early fans, the band were dirt-poor, any money they had went into better and more equipment, nothing else mattered 'cept the band, and the punishing rehearsal schedule they went through in the basement of that house- 5-6-7 hours solid, on a daily basis - meant that when I saw them play in rehearsal they absolutely floored me.By contrast a UK band like Napalm Death would barely rehearse maybe 1 time a week, or just whenever a big gig was coming up, this was for logistical reasons, because the ND members lived in different cities- Birmingham, Coventry, Liverpool etc.Morbid Angel were on a whole completely different level.
Spending time in Tampa meant I got to meet Frank at Aces Records - a market stall- which was the only place where underground metal was sold, we struck up a deal so Earache releases would be on sale aswell- Ace's was probably the first store in USA to stock them.At some point I guess David had shown interest in a bullet belt, which were highly prized by metalheads but impossible to get hold of in Tampa, dont forget this was at a time before punk/metal stores sprung up to sell accessories to the masses, as the scene was highly underground at that point, you made your own fashion.So as a signing gift I gave David a bullet belt, it might well have been my own, but i dont recall. Good of him to remember all these years later!
Posted by Digby at 12:56 AM