Gama Bomb & Bonded BB are on Vinyl LP for Xmas 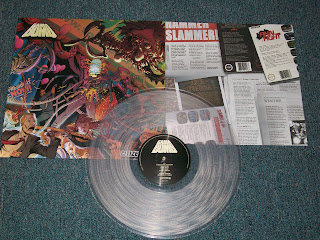 Question: hi there i was wondering how you decide which albums get a vinyl release.the reason for me asking is that vinyl is my prefered choice and would like to know why evile and sss got a vinyl release but gamma bomb violator and bonded by blood didnt also why was decapitated the negation released on vinyl and not organic hallucinos finally how rare is the green vinyl release of domination by morbid angel would i have to go to ebay to get one thanks simon From: sidav@hotmail.co.uk


Answer: Simple answer is if we are pretty sure we can sell 1000 copies on LP, then we think about printing it.It doesnt sound like a lot, but strangely its actually not always possible for us to sell that amount, for proof, I simply have walk 10 metres and look at the hundreds of unsold EVILE double gatefold 2 x 12inch Black vinyl LPs sitting on our stock storeroom shelf.This is probably the fastest rising Thrash band in UK, and I have unsold vinyl.Anybody want some?

What fans often don't realise is the huge costs involved in making a vinyl LP - the process is so archaic and time consuming,involving dipping the master into vats of steaming hot silver liquid, its positively medieval and wasteful, hence is 10x the cost to making Cds. Its this outrageous cost difference and general lack of interest in the format which prevents us making more vinyl. The good news you want to hear is that yes, Gama Bomb and Bonded By Blood will be available on LP from our webstores soon for sale, hopefully by xmas, and in limited edition colours- out of 1000 made I think 100 are on clear wax, 150 red 250 orange and 500 black.They are made in USA,we dont have them on store yet- so watch out for them.
To be honest we have this discussion- more like heated disagreements, actually- a lot in the earache offices, I can't stand vinyl, cos personally I have not played a vinyl LP for maybe 10 years, I dont even own a vinyl player, or 'record player' as the dratted wind-up belt-driven contraptions were commonly know as.Dan the Uk label manager on the other hand is a Vinyl NUT, and fights the analogue corner hard, insisting on LP releases wherever possible- so you can thank him for your collection, cos if i had my way, ALL vinyl would be banished for ever!! Mwahahaaa!!
But even I can see that the interest in the LP format is booming nowadays- questions I get asked on a daily basis on this very blog the most are like " how many copies were made of blah blah vinyl and err whats it worth?" Ive hate answereing such questions because i'm not a pricing service for ebay sellers. The easiest way is to check our EARACHE COMPLETE CATALOG page- click on the album title to see an informative list with photos of the special editions made back in the 90s.
As for Decapitated- all their albums were on vinyl, i think, but the last one,it slipped by I suppose. Green Morbid angel vinyl is original early 90s vintage so fetches top dollars on ebay.
heres a video explaining how vinyl is made:

The main problem with your thinking, Dig, is your target audience.

New metal fans do not specially want vinyl and that's why you are surrounded with Evile records.

If you re-release classic earache stuff in modest pressings (1500, 2000 copies) IT WILL SELL. People are paying 30, 40 even more pounds for old Morbid Angel, Napalm, Carcass, Bolt Thrower releases. If you FEED this market selling them the same thing for 15 pounds you WILL make money.

This vinyl that has been licensed off of you (BT, Cathedral, Godflesh) is not being done because Painkiller records and Kreation are charities. It's the money.

If you want to sell vinyl you have to release stuff that people over 25 years old will buy because they grew up listening to Cathedral, Morbid Angel, Carcass, Filthy Christians, etc.

Look at all these shitty punk distros selling copies and copies of rip offs of Sore Throat and stuff like that, THOUSANDS, of copies of discharge influenced stuff. Repress DISGRACE TO THE CORPSE OF SID and you WILL SELL A THOUSAND COPIES. Mark my words.

YOUNG PEOPLE DO NOT BUY VINYL, you have o aim for the collectors market and this composed of old specialized fans.

Cheers and think about it!

Thanks Alan- see we do read the comments on this blog.cos in the new year 2009 earache intends to re-issue a selection of 10 old school Earache albums on wax, as a one time only pressing.
limited to 1000.
which titles do you want? we might do Unhindered BY talent the debut SORE THROAT album, thats never been issued by earache actually.

to alan and dig firstly alan i am nearly 40 and have been listening to metal for nearly 30 years i own lots of vinyl from all genres from prog to grind.i have followed earache releases for many years including all there new thrash releases and cant see why an old metalhead wouldnt listen to evile or any any of the new up and coming bands on earache.i am currently buying alot of new thrash metalcore deathcore etc.secondly to dig a limited vinyl edition of the last decapitated release would be nice also some of the old morbid angel which are fetching top dollar on ebay(covenant, gateways and domination)would be nice thanks simon

great to hear about the future re-issues theres plenty of the early stuff im after but cant find it in a good enough condition .
Also would like to add that these should be standard vinyl not picture disks (possibly heavy weight) possibly in interesting colours .
the ones to reissue are obvious but i will add my 2 cents:
at the gates - slaughter
cathedral - carnival
morbid angel - blessed
sleep - holy mountain
carcass - heartwork
entombed - left hand

@Alan Watson in regards to young people not buying vinyl.

You couldn't be more off base! I work in a record store in Chicago, and every day we have young people buying records that have been for a few years (punks and their 7-inches), as well as young kids that are buying Zeppelin or Beatles records for the first time.

Vinyl is our bread & butter, and there's definitely a mix of old-timers (like us employees) and teenagers buying records constantly.