Question: Hi, with the demise of the local record shop, and slowly the highstreet stockist (woolworths, Zavi, MVC etc)has Earache suffered with respect to attracting fans to new releases? or has the popularity of Myspace etc compensated? Also what percentage of Earache sales do CDs and downloads make up? thanks From: gethindavies05@aol.com


Answer: Yes, its a time-bomb to all labels - as more record stores go to the wall in the current situation, its not good news for us.Without the High street outlets stocking the Cds, many artists lose their retail visiblity, so fans who like to browse in store are forced to dig deeper - often to specialist record shops or via online - to get their metal, and many fans simply arent accustomed to shopping that way, yet.

Woolworths was mainly stocking Top 40 so that doesnt affect too many Indie metal labels, but Zavvi on the other hand had a massive metal section and used to support the metal labels a LOT, advertising big titles in the metal magazines, so with their demise it only leaves HMV still operating as a UK high street operation selling metal Cds.
Its a strange anomaly that anyone can see that music is immensely popular with fans- every kid you meet has ipod ear buds in, and the world is enjoying music more than ever, BUT not via those shiny round silver discs, which are showing their age, technologically, Mp3 music files are the format of choice, soon to be music streams infact.

A Knock on effect of the chain stores closing down, hardly mentioned in the national media, is the folding of Pinnacle distribution, which closed its doors a few days before Xmas.Pinnacle was a famous UK distributor of indie labels, of 2 decades standing, and naturally carrying some big metal companies, many of which won't be paid for their sales now.Some of the labels have lost all their sales income for last 3 months, and even for the most hardy of record companies, its a hammer blow some wont recover from. 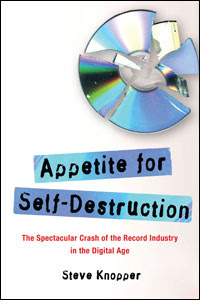 Cds still make up 85% of Earache's sales so its a worrying situation, paid-for downloads and other digital income (ringtones) is growing extremely fast, and major corporations are now paying for use of music- the popularity of the new Nokia 'Comes with Music' mobile phone and advertising revenue from the billions of streamed music tracks from Myspace.com and youtube.com are soon to be shared with the labels (well the ones who sign up to the deals offered), this is big news, but its not yet enough income to replace Cds. Many labels including Earache are diversifying into T-shirt merchandising and licensing music to Video games or movies, some are trying to get a small slice of the live income of its artists aswell.
In the long run, the signs are that paid-for digital music income will actually become the music labels saviour.
Posted by Digby at 1:34 AM