Were NWOBHM band HELL an influence? 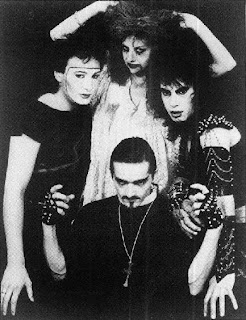 Question: Was the band Hell a big influence on earache at all? As from reading interviews with them yourself, andy sneap and the guys from heresy were frequent atendees of their shows. the influence on andy is blatent but im just wondering did it have an influence on you as far as your own bands or starting the label? Also what are the odds of you ever releasing material by your own projects dig as you did mention them in the terroizer interview a few years back. From:


Answer: I'd forgotten all about the local Derby/Notts 80's NWOBHM band HELL until Andy Sneap started to sing their praises in an interview he did for Wicked World/Earache where he mentions how they were a big influence on him- I think they lived in his village, Ripley.As for me, I can't say I was a big fan, as I mostly was listening to and preferred manic Hardcore punk bands, plus the fast, punky, down n dirty early 80's UK metal acts like Motorhead, Vardis and Tank, quickly leading onto the equally speedy big 4 Thrash bands coming out of USA.Slayer is my main influence, always will be, they changed my life, quite literally, as the unspoken aim of my label's early output was to 'Out-Slayer Slayer', which is tough to do, beleive me.
Back in early 80's it was really unusual for HC and metal dues to mix, but Nottingham was luckily quite a close knit and open minded town, I do remember seeing them live,I guess the dudes from Lawnmower Deth dragged me down to see Hydra, the early incarnation of Sabbat, and I would have dragged the Heresy dudes along too.
As for my own bands- theres no need to release anything as they were just hobby, non-serious 'bands' designed to have a blast and a bit of fun, with the aim to make noize and make people think, in the early 80's.Both revelled in short fast blasts of Noize, in many ways they predated and hinted at the style Earache would release later in the decade.You can read about Genocide Association and hear a Skum Dribbluurz gig here.
Posted by Digby at 12:14 AM