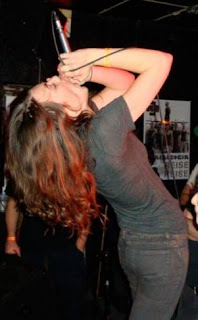 Question: is there any reason why earache isnt working with landmine marathon? im wondering because its one of those bands that on paper you should be considering their influences appear to be a whos who of earache bands.

Answer: In short, not just yet.We are following the band's progress, from afar, just like we do with a zillion other promising acts.Its a shame i havent seen em live- they gotta tour UK for that to happen, as my trips to USA lately are few and far between.
After an amazing write-up on my favourite music blog INVISIBLE ORANGES we checked out the myspace and its pretty cool to see them praising the old Earache grind/death metal stuff from the past.We're chuffed with that!
The band also appear in the latest REVOLVER mag aswell, and vokillist Grace posts a highly entertaining blog on Revolvers site too, which makes them stand out from other bands and shows understanding of promotion etc.All in all, yeah I take your point that they have all the ingredients to be on this label, but no offers have been made.I see they already have a label anyways and its not always cool to muscle in on bands who are already happy elsewhere.
Another reason is we are picky and downright snobbish about bands - frankly, they need to blow us away to get signed.I find this a lot with young bands who worship the old Earache style and sound, they sound eerily familiar, but much like an old school pal who you meet again aged 30 or so- they are unrecognisable.To my, admittedly shot-though ears, Landmine Marathon sound like an polite, diminished echo of the past.Grindcore is supposed to be feral, unhinged and fucking off the hook.
The only bands in America who shock me are OCEANO and INSECT WARFARE.
Posted by Digby at 10:58 PM

Thank you sir for the kind words! We will make it to your shores one day soon, hopefully we will cross paths then!
lm