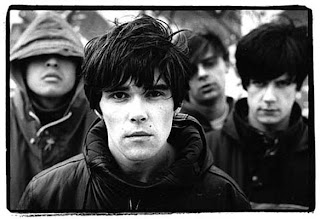 Question: why did biomechanical make a cameo apparence in the bbc blood on the turntables series? i belive the episode they featured in was the one about the stone roses. From:


Answer: Thats bizarre! But yes, you are right- see 7.40 in the video below, Biomechanical appear in the documentary about the UK's 90s breakthrough artist- Stone Roses.
The connection is both bands were signed - a decade and a half apart - to long standing west midlands Rock label FM REVOLVER Stone roses released a 1987 single Sally Cinnamon, and Biomechanical released Eight Moons CD in 2003.I can only imagine that when the film team arrived to talk to Revolver's owner Paul Birch, he took the opportunity to get them to film a bit of Biomechanical to use as cut aways in the documentary, a slight attempt to get a bit of promo going for the new band.
I agree its really bizarre seeing the 2 bands in the same documentary.Thats the connection.

Took me ages to get hold of this album. Really obscure but a fav.
Good to see something left of the real lineup on youtube even if it is this. RIP.