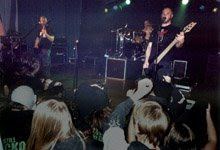 Question: The German grindcore band Cock and Ball Torture recently participated in a split EP with Agathocles amognst other bands, where they performed \"A Tribute to Earache Records\". On this \"tribute\" they proceeded to perform Grindcore covers of famous band signed to Earache who weren\'t exactly Grindcore or Death Metal, with covers of bands such as Adema, Addiction Crew and Fudge Tunnel. Have you heard this EP and what do you think of the idea? From:

Answer: That was pretty funny, they can take the piss all they want, I don't mind. I guess the guys in C&BT don't really have the skill or technique to pull off a cover of any of our actual grind/Death Metal legends.If you compare the two bands- I honestly beleive Adema do infact sound heavier and more powerful than CBT!
I've never been a fan of C&BT, they are a really piss poor attempt at a grindcore band.Years ago we had a German kid working at Earache for a time and he would constantly bug us about GUT and C&BT, so I checked em out, thinking we might be missing something.Nah they were garbage back then and still garbage now it seems.
Agathocles on the other hand i do have time for - a decent band, Earache must have turned them down a few times in the early days- they just didnt cut it to be a premier grindcore band in my opinion.
C&BT should cover Earache's latest greatest deathcore band OCEANO, but i doubt they could manage it.
Posted by Digby at 9:11 AM

Cock and Ball Torture are one of the biggest, most respected names in the so called 'underground'.
Slandering them for absolutely no reason is a very poor call made by whoever it is that runs this page.

I had no opinion of EarAche Records prior to reading this, but now all I can say is that if people like this are running the label, I'm staying away from anything they release.

Keep in mind that while I may be the only one bored enough to actually entertain you with a comment, I sure am not the only one holding this opinion.

fuck you CBT are talented and i will do everything in my power to stop bullshit labels like you from oppressing amazing music that the individual people want to hear.... i'm not stupid enough to believe that i alone can do a damn thing but i DO know that the hundreds of people i'm in contact with via the internet everyday will in fact stand behind me, UNITED UNDER PORNOGRIND!!!!! nuff said