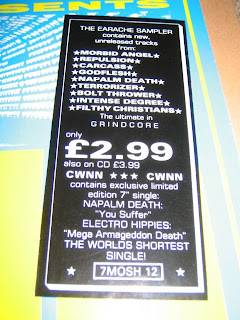 Question: I wanted to know if you could shed some light on the origins and influence of the Grind Crusher compilation. I just snagged a used copy (the 24 track version) and I\'m enjoying it immensely. There\'s some weird/interesting tracks on there too (Mighty Force \"Thrashing a Dead House?\"--I didn\'t know Earache signed techno bands!)
I was also curious what you think about other compilations such as the Cry Now, Cry Later compilationss and the Relapse released \"This Comp Kills Fascists\". Insect Warfare is on there as well as other great grind acts like Brutal Truth. From: jondd87@yahoo.com


Answer:Ah thats a great question- takes me back to me youth! The version you have was released in 1991 and was an expanded 24 song edition mainly for the USA - it included more bands, and lengthy liner notes- because the plain and simple original 1989 edition (9 songs- pictured above) of the GRINDCRUSHER comp was a UK only release, as my label had not figured how to export and distribute the releases internationally at that point.
The idea for the release was to simply showcase the bands Earache had signed at the time, which was and still is, a standard label ploy, I guess I was influenced by earlier great themed comps like Alternative Tentacles' Jellybeans and MRR's 1984but Earache's compilation was pretty radical as it was the very first grindcore compilation ever to be released at retail.

It marked the debut appearances of Godflesh, Morbid Angel, Repulsion, Terrorizer and many other legendary names. Indeed the first time the actual word GRINDCORE was printed anywhere -was on the sticker of this record.That term was coined by Mick Harris of Napalm Death to describe the harsh, de-tuned,crushing grinding sound the acts were playing-it was in common parlance by all the trailblazing musicians in the scene- so I ran with the theme of GRIND.Earache also had the Grindcrusher tour planned for November of that year, to co-incide. (little known fact is Kevin Sharp travelled to UK and covered that tour as a writer for an Industry(CMJ) mag, returned with his mind blown, and within a couple years had formed Brutal truth)

Being acutely aware of the radical nature of the sounds of Earache bands- literally nothing existed in the music world that was so singlemindedly harsh & extreme prior to this- I figured the cover art ought to reflect that.I designed it to be deliberately garish, stark & colourful so as to look apart from everything else around at the time, to be apolitical, and be the opposite of a black & white, generic (and now timelessly classic) DIY/ Hardcore Punk style.Back then printing costs depended on how many colors (films) were used,making 4 color sleeves was 4 times more expensive than 1, thats the simple reason why the B/W sleeve predominated in the Punk/HC scene- it was cheaper to print.

Mighty Force were'nt techno, that scene came a bit later- they were what was termed "Industrial"because at the time, Front 242, Ministry were breaking through, and the "Belgium Beat" of T99 and Quadrophenia was considered new and highly cutting edge on the Independent scene.Anyhow the song fuses Industro-Belgium beats with Napalm Death and ENT samples, thats how the Manchester duo caught my attention.They were an early example of a cross-genre "mash-up" of sorts, but in hindsight I agree with you, the band sit really strange on the comp, looking back.

The CRY NOW CRY LATER comp was a few years later, mid 90's I think.It passed me by completely at the time, as Earache had some huge bands on our hands then- I do remember thinking those so-called 'powerviolence' scene bands were more like a return to speedy lo-fi Hardcore punk and because they typically had very few Metal touches, I lost interest.

The Comp This Comp Kills Fascists which was released by Relapse in 2008 really fascinated me as the timing was perfect for a sampler to highlight the new bands in the scene, the title itself was pure genius and evoked a retro political stance.It was tastefully done, and another Relapse success story.For me the main highlight is the superb Insect Warfare who rule.
Posted by Digby at 1:59 PM

cerpintor said...
This comment has been removed by the author.
5:10 PM