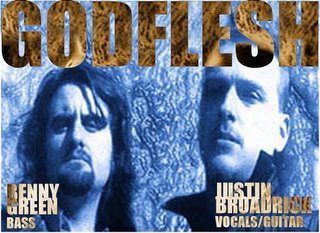 Question: after godflesh split did jesu negotiate with earache at all or did the deal with dry run and hydrahead directly From: Unknown.

Answer: Earache signed Godflesh in 1989 and released the complete Godflesh recorded works for a decade.The band became very influential in the Industrial Metal genre,with their early output such as "Streetcleaner" setting the standard for others to later follow, but by the final Earache album 1999's "Us And Them" things were'nt looking so healthy in our view.In hindsight, and it seems to have happened to many many of our longer serving bands- Napalm Death,Godflesh, Carcass, Cathedral, Morbid Angel-the ongoing strain of dealing with a decade of daily dramas to keep the acts career going eventually takes its toll, and then both sides know,for no more reason than sheer indifference, its time for a change.

Godflesh signed with Music For Nations for their final album Hymns in 2001.Meanwhile the Earache sales manager at the time, Raffi, who was a Godflesh nut, suggested the idea of an anthology, which he co-ordinated as the 2XCD "In All Languages' release on Earache.

When Justin regrouped as Jesu a year or so later- no contact was made from or to Earache.As it happens Dry Run is the label of our former sales guy- Raffi.
Posted by Digby at 1:52 AM