WHY DID DUB WAR SPLIT? 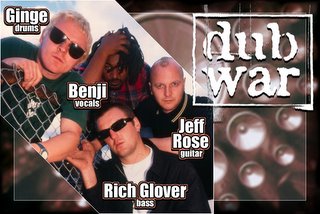 Question: A friend of mine said that dub war \"split\" to get off earache is this true? From: Unknown.

Answer: Yeah theres an element of truth in that.Earache signed the Welsh Ragga-Metal merchants in 1994 or so, to quite a lucrative deal, thinking their unique brand of music would undoubtedly be a worldwide smash.The band's talents were never in question-it was simply a matter of wether the fans would accept such a genre-breaking band in the mid 90's.Dub War's debut album "Pain" did well, hitting Number 1 in the UK Indie charts and spawing a number of successful singles.

Meanwhile bands such as Dog Eat Dog and even Skunk Anansie (remember those two??!)- who both supported Dub War on their early shows- both got huge - due to being much more radio and MTV friendly at the time.Doubts started to creep in when the follow up album "Wrong Side of Beautiful" didnt sell anywhere near as well as the debut, so Earache started to cut back on its support of the band.Honestly speaking, Earache lost a shitload of money on the band, by playing the very expensive UK chart game,and losing, it nearly bankrupted us.

The band could see that our financial support to them was winding down, tho we still beleived in the band as people and shared their musical vision, we were as perplexed as the next man why they werent huge, so they split up.Earache carried on for a few months with Benji's solo hip hop project but severed all ties shortly afterwards- just as the band regrouped and mutated into Skindred.

No-one is more pleased than us to see Benji and Skindred making a successful career now, 10 years after Dub War, with essentially the same sound.I guess the audience is more open minded now,music is mixing and blending more than ever, in the era of mash-ups, dancehall, punks and metallers into reggae & drum n bass etc, so we wish them all the best!!

Who knows? Maybe folks will start to buy Dub War records again too?
Posted by Digby at 1:18 AM