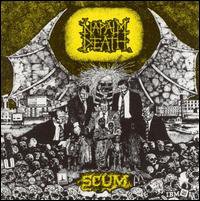 Question: next year will mark the 20th anniversary of one of the most legendary albums ever released. Napalm Death\'s \"Scum\". I was wondering if Earache was considering some kind of deluxe re-issue of this landmark album for 2007. sonically, it would greatly benefit to have a digital remastering done to vastly improve the sound quality of a recording that is 20 years old, not to mention the inclusion of bonus tracks, video footage, expanded liner notes & pictures, etc... From: selfinduced@rcn.com

Answer: jeezus is it 20 years? seems like 20 minutes ago we put scum out! We have no plans to do any re-issue work on that classic- even tho I agree, it does sound old and kinda weak production/mastering, it was MADE to sound that way so if it aint broke dont fix it right?

who knows? we might change our mind and do some kinda updating/expanding job on it in the future- we'll have to see what Napalm Death think about it tho..oh, none of them cept Shane played on that album, i forgot. Maybe we'll get Mick Harris to remix it?
Posted by Digby at 10:41 AM