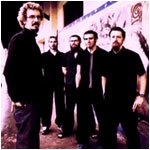 Question: This is a question that i have wondered about for a long time why didnt earache sign or attempt earthtone 9, i mean they had all the ingredients that most earache bands at that time had eg nottingham based, former members of earache bands either in live line up or for collaberations eg working with members of iron monkey and so on. It just strikes me as weird as of all the nottingham metal bands at that time earthtone9 seemed to be the one that slipped through the net From: Unknown.

Answer: yeah you are right, it is weird i suppose,Earthtone 9 were a brilliant and important Nottm band but we never worked with them. Earache does historically support and get involved with new Nottingham bands, if they are any good- from HERESY,LAWNMOWER DETH, FUDGE TUNNEL, PITCHSHIFTER, IRON MONKEY, even the short lived but amazing SILENCER there's probably not another label out there that has given a chance to so many Nottm based bands in their early stages, since we live in the city we catch a lot of bands playing early on.

But if you asked any of those bands what they thought of their time on Earache none would be very complementary i expect, and thats always been our problem in our small provincial Uk city- small talk, bitching and backbiting take precedence over actually getting off their arses and building a career for many bands in this wonderful gun-crime-infested place on the banks of the river Trent.Its a long standing mystery in the Nottm music scene why exactly has no Rock/metal band from this area ever become absolutely huge on the world stage, and i personally think that that tendency is the major reason.

Naturally we approached Earthtone 9,(guitarist Owen used to work at Earache for a short time, and played us his Blastcage demos while here, which sucked) but they had just inked with new label Copro, so to do the right thing we made a license offer to their label- Copro- which as just starting out and was putting a hell of a lot of faith in E9. Copro rejected the offer.We put a lot of it down to the bad rep the label has garnered locally, plus the strong DIY ethic which the band subscribe to, which is another local trait.

A similar thing happened when we tried to sign DAI LO- another set of local hopefuls from 4-5 years back, who rejected our deal offer and after a stunning debut on Copro, disappeared without trace.

Earache still watches out for local bands, but is not trying to sign any at the moment.A new label in town -In At The Deep End Records- has recently signed SANZEN, so maybe there is going to be another revival in Nottingham's metal scene soon?
Posted by Digby at 12:30 AM