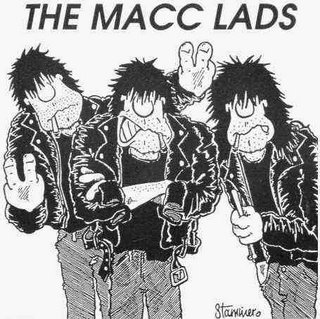 Question: this one is for digby, are you the dig pearson whos in the thank you list of various macc lads records just out of interest. From: unknown.

Answer: yup its me..tho i doubt I was actually 'thanked' on any Macc lads records when they were going during early-mid 80's..its the first time i heard they mentioned me, since i have none of their records to bother to check.
I used to slag them off in my column in Maximum Rock n Roll fanzine for being sexist cunts, and rubbish musically aswell.Hmmm-I guess i had a sense of humour bypass when i was younger, being yer typical UK angry politico crass/discharge anarcho type back then, so macc lads lyrics were deemed a complete fucking sexist nightmare. This was before PC (political correctness) came into fashion!