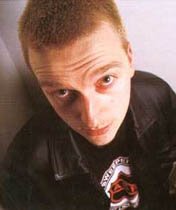 Question: Here\'s another question that\'s been bugging me... sorry for all the questions but there\'s so much about these bands I wanna just find out:

Godflesh is probably one of my favourtie bands ever and probably the most unique band to ever sign to Earache. I actually read from the official Godflesh fansite (Godflesh.com) that Godflesh and Kirk Hammett of Metallica fame actually had some bad blood... well sort of.

Kirk supposedly said that Godflesh was one of his favorite bands and that their music is unbelieveable crushing. Justin Broadrick and Godflesh were flattered and they supposedly actually had contacts with one another here and there. Later however, Kirk Hammett and Metallica made the album \"Reload\" and some of the artwork for the album was taken from Godflesh\'s music video \"Crush My Soul.\" Kirk or no one in Metallica credited Godflesh or the director of that music video for the cover art or the artwork credit. Hence Godflesh and Kirk had some bad blood but in the end, one time Kirk mentioned in an interview that the most heaviest band in the world is Godflesh, which was his way of easing the tension between the two bands.

Long story I know but I made it short for ya... now this is according to Godflesh.com but it just sounds too good to be true so would you know if this is somehow valid?

Also, just one more question that\'s Godflesh related: I heard that Justin Broadrick was once asked to join bands like Danzig and Faith No More full time but he declined the offers... was this a rumor or is this true to your knowledge that he was asked to join these two bands?

Thanks once again! From: davidaloca@gmail.com


Answer: well- as this page says-if you wanna know something- you came to the right place! Its pretty much 100% true actually.Godflesh was one of Earache's most innovative bands in the early 90's grind/death era, by having more industrial and arty leanings, their truly crushing, drum machine driven sound was totally heavy but also stood out from the pack.
Godflesh quickly became very famous with the SF and LA alterna-metal crowd- i think a Kerrang! magazine writer Steffan Chirazi was responsible for this- he seemed to be turning on all his friends like Metallica, Faith No More and just about everyone else in California into Godflesh fanatics, such that when they toured West Coast for the first time around 1994, Kirk Hammett actually asked Justin to drop by his palatial home and studio and to jam together and hang out and shoot the shit about each others bands - Kirk generously gave him a guitar and some 'tallica momentoes, and naturally attended the Godflesh gig later ( i think Lars came too?)

I guess that was where Justin mentioned to Kirk that Godflesh's new video "Crush My Soul' had been directed by the up n coming avant garde artist Andres SerranoThe artist had become famous for graphic artworks like Piss Christ(a controversial photograph of a crucifix immersed in a beaker of piss), and Godflesh was the first and only music video he directed.

It seems that the next Metallica album cover-1996's " Load" utilised the same artists work, no doubt influenced by Godflesh's video years earlier.I guess Justin felt he had given kirk the idea, which is no doubt true, i dont actually think any of Godflesh 's art itself was used by Metallica tho, that would be cheesy.It was the idea of using Serrano in the first place he was upset about.

And yes its is true that both Faith No More and years later Danzig asked Justin to join their band on guitar- both times he refused, prefering to make his own music.
Justin nows plays in his incredible new band -Jesu.
Posted by Digby at 12:26 PM