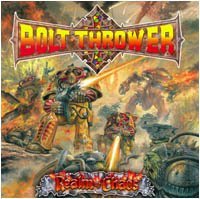 Question: Is it true that the reissue of Bolt Thrower\'s \"Realm of Chaos\" was done without the band\'s consent and permission, and the band will not receive any royalties from it? From:


Answer: Hey- if the band can keep recycling and flogging the same riffs for album after album , why can't we recycle our albums too? ha ha. See the earlier answer to this question here.
We have had minimal contact with bolt thrower for over a decade, since we dropped them from the roster in the mid-90's.However,we certainly did inform the band that the rights to the original artwork were due to expire and asked them for ideas for new artwork.However, the band did'nt want to co-operate in this discussion, preferring I suppose, for reasons only they know, for the record to be deleted or released in a plain white sleeve...errr neither idea exactly appealed to us.

The fact is, we dont actually have to seek their permission anyways....

Back in 1989 for Realm Of Chaos' original release Earache negotiated a special deal with the world famous Fantasy Wargaming company Games Workshop (who's HQ was handily based in our home town in Nottingham UK) to use their copyrighted artwork from a leading Game 'Warhammer 40K' on the bands album cover and all associated packaging- by about 2004 or so the rights expired and so the art had to be removed for new subsequent pressings.
Earache decided to approach the original artist John Sibbick to draw a similar themed peice of art, 15 years after he had done the original, but this time specifically for this album, which he was happy to do.

Its true the band were not happy with the new issue, and released a press release condeming it, which is in fact a breach of their agreement with Earache.Its quite untrue to say they will not receive royalties from the CD.They have received plenty of royalties from it since release and will continue to do so, i guess they have to stop condeming it first tho?
Posted by Digby at 10:18 AM