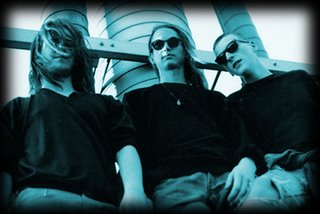 Question: What is Sweet Tooth, Mosh 26 in the mosh catalogue. IS its a Godflesh project? any info please.From: hany33@hotmail.com

Answer: This blog is rapidly turning into Justin Broadrick back cat discography site! but thats ok.
Well Sweet Tooth was as you say,Earache's 26th release and it came out hurriedly in 1990, but we were'nt exactly planning to release it.As was the way at the time in the early 90's Birminghams thriving Alternative rock scene, Justin, who had recently signed to Earache as his main band, Godflesh -also had a number of other side project acts he dabbled in-many of them still record sporadically to this present day:like, Final, Fall of Because etc. But Sweet Tooth only made one recording.
Justin left Napalm Death to join upwardly mobile local Indie rockers Head Of David on drums.Head OF David were enjoying incredible success at the time, and had signed to Blast First, Sonic Youth's label,consequently HOD's releases regularly hit the number one spot on the Uk alternative charts, and did quite well.
Another local act SLAB were a mesmerisingly heavy indie band with an amazing bass-driven sound, who were well respected.Sweet Tooth came about and comprised of ex-HOD Dave Cochrane,on bass & vocals plus drummer Scott Keihl (Slab), and on guitar Justin Broadrick and it sounded like a jazz-infused heavy rock band, very strange to these ears.
The release was rushed as it was originally supposed to be for a new label run by a then-Earache employee (soon to be be ex-employee), but after some cloak and dagger wranglings it appeared on a fangled Staindrop/Earache label on 12inch and casette only, no CD. Staindrop being named after the birthplace of the employee.
Posted by Digby at 1:20 AM