Grindcore 2.0 -time for the return? 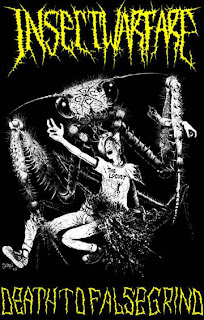 Question: Is there a potential grindcore return on the cards? being as youve stuck both the narcosis discography and also the insect warfare cd on the site. However rather than reissuing recently defunct bands surely it would be time better spent getting the active ones eg rotten sound or man must die ( who earache turned down aparently) From:

Answer: We know a thing or two about the genre having signed one or two of the main bands early on, but the grindcore scene in general has never really been away, when a scene has its own festivals like Obscene Extreme and Blastonbury, it can hardly be considered as on the wane.I know what you mean tho, if you look at the label, as far as Earache is concerned, apart from a short-lived licence of Watchmaker, we haven't worked with any new grindcore band for at least a decade, merely contenting ourselves with keeping our old 'classics'(ND/ENT/BT/AC/TZ etc) in print, and then - bang! from out of nowhere-2 newish grind acts appear on our schedule within months.By the way,Insect Warfare is not officially announced as I write this, but will be shortly.
The reason is simply that yeah- we appreciate prime grindcore bands again.Took us a while didn't it? The fact they both split up is co-incidence.As for the reasons we picked these 2 bands and not others like Phobia, Rotten Sound or Man Must Die- we think Narcosis and Insect warfare display the essence of pure grind, they convey the same'feeling' to me, that the original bands did way back.Insect warfare sounds ike the album Napalm Death SHOULD have recorded after FETO,if the line up had remained stable and they hadn't decamped to Florida for a Death metal mission.
To be honest grindcore needs to be shocking, the intensity of playing and feeling needs to take your breath away when the CD goes on,most of the grind bands we hear come across as sped up death metal, while we were expecting armageddon of the ears.So many bands are playing 'grind by numbers', most of them they have the affectations of grind- the short songs etc but many miss the reason, the heart behind it all, which is the sheer unmitigated misery of humankinds existence.
Posted by Digby at 10:59 PM