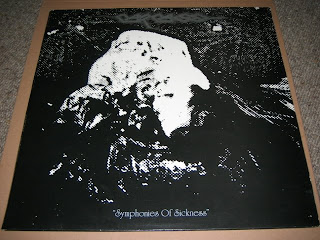 Question: Hi guys, and first up, thanks for the Carcass re-issues! I\'m sure you\'ve heard it all before but the packaging is just fantastic and the bonus tracks and DVD extras make for a formidible collection. I\'ve been collecting them all as they have been released and just recently completed the collection with Symphonies of Sickness, which brings me to my question - I\'m curious about the cover that appears on the Symphonies reissue. I\'d never seen it before the reissue, and although it states on the website that the cover is the original - unused since the first release - I was hoping to find a bit more information about it in the package, perhaps a bit in the DVD, but the mystery remains. So, could you please give a bit of info about the origin of the cover, why it was withdrawn/replaced, and why it has dissapeared for nearly 20 years? Thanks! From: XXXXXXXXXXXXX@hotmail.com


Answer: Thanks for the kind word Gareth and cheers for collecting them..we had fun making them.It's the original b/w image which did indeed adorn the front cover (pic above) of the original edition of Symphonies Of Sickness LP, released in UK around october 1989 from memory.Unlike the debut LP "Reek of Putrefaction" which revelled in the gory sleeve, and for that reason never appeared for sale in a UK mainstream/chain record store, this one was more subtle,the gore was on the inside of the gatefold so that store buyers could not be offended by the sleeve and the store would therefore stock it and rack it.It was the first Carcass 'sell out' if ya like- minor alteration to the bands mindset to acheive a career.The label had done 16 releases up to that point and was begininng to suss how important the main retail outlets were to acheiving big sales numbers, so it was decided the outer sleeve had to be 'toned down' to acheive that aim.The sleeve was meant to resemble a funeral service condolences card -black, sombre, simple- the swirly writing of the title and song listing was meant to allude to classical symphonic orchestras.The image itself looks like a bunch of dots, but conceals a sinister secret which I'll now reveal.It is best viewed upside down,at arms length, and if you squint your eyes you can make out a murder victim.The 2 white dots in the carcass logo are the lapel buttons of a young woman's coat- the dead woman in questions face and top of skull has been axed/bludgeoned repeatedly in the middle.
Ironically, when the record was released a year or two later in USA on Earache/Combat the gore was deemed less a problem for sales and was even racked in CD long-boxes which had gore aplenty.
Posted by Digby at 11:51 PM

cerpintor said...
This comment has been removed by the author.
12:35 AM

It's not really a huge mystery what the picture on the front is as the full photo was published in the Choice Cuts inlay a few years ago.

Awesome album, one of my all-time favourites of all genres, and imho the best grindcore record along with ND's Mentally Murdered Ep and Terrorizer's World Downfall. I have the gatefold sleeve LP, the censored 'purple cover' cd and the dualdisc reissue. And by the way me and friends all found out what the cover was when we bought the album in 1989!!! :) I think it's quite explicit!

And all this time I thought it was Bill Steer standing in front of a Vokswagen.

the photo of the woman is in the wake up and smell the carcass booklet(ithink) or is it on the tray? i forget. but you see the pool of blood shes laying in. pretty gnarly. i love that album