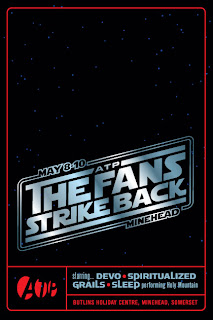 Question: Was the carcass reunion really inspired by the emperor one? in that mike saw how much emperor made during their reunion jaunt and thought to himself- i want some of that! From:


Answer: Yeah, thats pretty much true I think.I know Jeff Walker kept a close eye on the fees which Emperor made during their short USA reunion jaunt and more relevantly the short-lived Celtic Frost re-union tour of a year or so back.
The gig fees which other reformed 90's extreme metal acts were able to command in recent years is pretty staggering, when compared to the tiny gig fees they could command back in the 90's when the extreme metal scene was pretty much in its infancy.Nowadays the gig and festival circuit is more developed for metal in general and the live circuit and associated industry around it (merchandising/ticketing etc) is hella lucrative.You can't blame the bands for reforming when a fee for a gig in 2008 is 10x the fee the same band could get in 1995- luckily for them, their time away has been kind,and new fans were queuing up to get to see the band, its mainly driven by earache keeping the Cds in print plus the power of the internet and widely file shared mp3's I believe.
I beleive there will be many more acts doing this in the coming months- infact as I write this i'm hearing SLEEP have reformed aswell, for 2 shows at UK alternative festival All Tomorrow's Parties, in May 2009, maybe more gigs at the major Euro festivals will follow, I wouldn't be suprised.
On another note has anyone noticed that 3 of the worlds biggest ever Rock bands - METALLICA, AC/DC & GUNS N' ROSES all have new Cds out within 8 weeks of each other after years- or in some cases decades- without any new material.
Rock is basically back in vogue and in the driving seat of the global music industry right now, driven by the success of RockBand and GUitar hero games etc I don't doubt.
Posted by Digby at 3:00 AM