Vader on Earache in early 90s 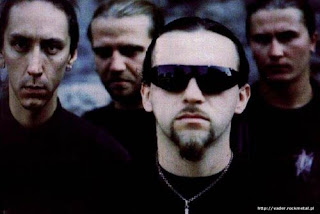 Question: I\'ve been listening to Vader\'s The Ultimate Incantation lately (what
with them recording a bunch of old songs and pawning it off as a new album) and I
got to wondering, why did Earache only release that one Vader album? From:
tmeisenheimer@yahoo.com


Answer:Simple answer is- Earache was the very first metal label to release an Eastern European band- nothing pleases me more than to see Piotr celebrating 25 years of Vader, but in hindsight, we did Vader too early in their career, they had the talent and work ethic, but also were naive and young, plus, it was to be a few years later that the wider metal scene was accepting of Polish DM bands.

Earache was enjoying a golden period at the turn of the 90's - the death metal/grind scenes that our various bands were spearheading, began exploding all over the planet.We heard the demo of upcoming death metal band Vader, they worshipped Morbid Angel and musically they were killer, it was right up there with the best- just one handicap - they were based in Poland.

I say handicap and I mean it- this was a different era then,Poland was very recently still under Communism, it wasn't part of EU like today.The band endured a level of hardship few western acts could stomach, basic music equipment like amps or guitar was hard to obtain.Immigration red-tape meant It wasn't even certain the band could ever leave the country to tour.They spoke no English.The retail music scene consisted of bootleg cassettes sold on the street for 30pence, Cds in stores at western import prices were deemed a decadent, unaffordable luxury.It would be akin to signing an Iranian metal band today.
Still, Earache took the gamble partly because of the success Roadrunner had with Brasil's Sepultura- if a band could break out of Brasil then we figured why not Poland?

The band made some mistakes- taking 2 attempts to record the debut, the entire first recording at Sunlight Studios (Entombed) was shelved as the band seemingly were more interested in Stockholm's nightlife..the second attempt at Rhythm studios -in Uk, so we could oversee it, was the version released.
Earache paid for Vader to tour all over the planet, I remember them coming back from a USA tour loaded with goodies, not just guitars, pedals, drum parts etc but a full tattooist set up- needles, inks, spares the lot. The bands manager failed to grasp the economics of the music biz - he never grasped that the tens of thousands of dollars we paid out in tour support was recoupable from the band royalties.To be fair, many bands even today don't understand this, the costs of touring across continents of Europe and USA, are frankly astronomical for a new band.

Eventually when we weighed up the pros and cons, compared to the other Death metal bands we did, sales were poor -Vader sold 10% of Morbid Angels debut for instance- so in my view, Vader didnt warrant another album, hence, we parted with the band.
Posted by Digby at 1:40 AM

Well. I could expect this watchig what their managemen is doing today