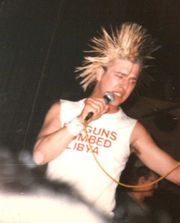 Question: i heard somwhere that a long time ago earache tried to sign legendary punk/hardcore band conflict is this true? also did you really try to sign the refused when they were between labels? From:

Answer: Nah thats not true..i've never been that much into Conflict tho many of the other UK anarcho bands were my total faves.Earache was'nt going when they were in their heyday and later on I think they have formed thier own label- Mortarhate which has been very successful for them.As for refused- Nah again.We were aware that they were an important band, but chances to sign them never came up.
Posted by Digby at 7:02 AM