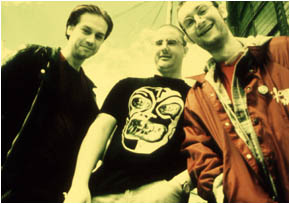 Question: alex newport said in an interview that he has some unreleased fudge tunnel material left over if and when this is released will this likely to be on earache From: Unknown.

Answer: thats doubtful cos no one has mentioned the word Fudge Tunnel round here for about a decade.There appears to be no interest in that band since they split...where a lot of Earache's older bands garner new followings as each generation of extreme metallers discovers the 'classics', I'm afraid the passage of time has not looked upon their creative output kindly.I guess they must have some fans like yourself, otherwise why would you bother asking- but sadly its not enough to warrant any release.
Posted by Digby at 8:46 AM

I would love to hear the lost fudge tunnel songs I would even buy them.