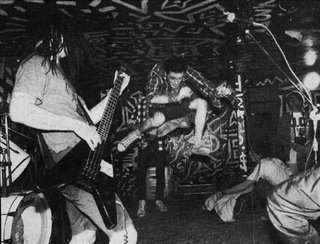 Question: I was wondering if you had any plans to re-release the Concrete Sox/Heresy split LP either in LP or CD format. I\'ve been on the hunt for this one for years, but have never been lucky in finding it. I\'m afraid that I already know the answer, but it doesn\'t hurt to ask. Please let me know when you have a chance. Also, I have been a big fan of your label for many years. I bought the Napalm Death-Scum LP when it came out so that was the first exposure to Earache. Since then I have purchased many titles on your label. Whenever it has the Earache label on it, I know its Loud, Raw, and Agressive, just the way I like it. Anyway thanks for your time and for many years of listening enjoyment. THANKS!!!!!!!!! From: mjb71@msn.com

Answer: Nah- there is no demand, as far as we can tell.Heresy split up in the mid 90's and Concrete Sox around then too...and you can get all the non-Earache Heresy tunes on an excellent LP and CD released by Boss tunage recently.The record you are talking about was Mosh 2 in the Earache catalog, and came in 2 different colour sleeve combinations, with the green and orange on the HERESY side the first pressing, of maybe 2000 copies.Later editions were orange and peach color combo.It was never released on CD.
Posted by Digby at 12:58 AM

you can buy really good stuff in excellent condition so check it out.
cheers markus
www.myspace.com/chiefjustice0