Carcass on Red Dwarf/Earache on the BBC

Question: I got a few questions relating to earache\'s relationship with the BBC and mainstream Media in general.
How on earth did carcass end up playing as craig charle\'s backing band in the red dwarf episode \"timeslides\" i belive its called?
Also who was the first earache band to do a peel session i belive its Extreme Noise Terror am i correct? Also relating to ENT how did their brit awards collaberation a few years back come about? From:

Answer:Yeah - you are damn right! Looking back its fairly unreal that what was a self-run, dirt-poor, start up DIY label operating outta my apartment in Nottingham,releasing what was basically unlistenable noise,managed to garner an unprecedented amount of mainstream media coverage on the BBC Radio and TV and NME magazine for so many bands. Two words- JOHN PEEL.Now he's sadly passed away, and music in the uk has sorely missed his presence- no one comes close to the impact he made by supporting new bands.

Hats off to the bloke- he 'got' what Earache was all about, immediately, and almost telepathically, he warmed to the burgeoning Earache Grindcore sound as it was taking shape, and his active support by giving Peel radio sessions to our acts (about half of Earache's first 10 bands recorded Peel sessions, the first being Heresy), actually helped shape how the scene turned out.John Peel described what turned him onto the extreme music scene in general in his foreword to the excellent book "Choosing Death" by Albert Mudrian,which chronicles the Earache-led birth of the worldwide extreme metal and grindcore scenes.

John Peel's support naturally gave the scene a veneer of credibility, and it kinda snowballed into other media- mainstream music mag NME placed Napalm Death on the cover, and UK TV shows like Snub TV and Whats That Noise?(Craig Charles was the presenter) began to request Napalm Death on the show,as well as the infamous BBC Arena-series documentary called 'Heavy Metal.It seems ridiculous now, but yes, Grindcore was the talk of the A-list Uk media dahlings for a while around 1988.We never asked them why - but in the Uk, a genuinely new, intelligent,unpretentious, raucous, street-level musical movement, which actually was popular with fans, was staring them in the face.

There was one early gig in London, at the Marquee I think-where as well as John Peel,the backstage fans included Vic Reeves and Craig Charles, both young up-n-coming stand up comedians at the time, but now both mega-successful TV personalities. Noted NYC jazz saxophonist John Zorn also came and supported Napalm Death and the scene in general, helping spread the word in USA.
Craig personally requested Carcass to appear the Red Dwarf show- i imagine because of his Liverpool roots, as some of the members of Carcass were from the well-heeled village of Heswall,in the Wirral,outer Liverpool.Heswall was also John Peel's birthplace, i expect he related to Carcass for that reason also. 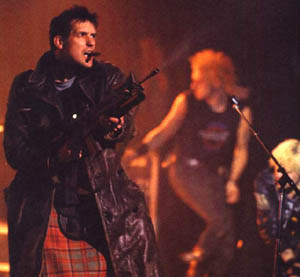 Extreme Noise Terror were not actualy signed to Earache when recording Peel sessions-but again, a quirk of geography helped their case.Like other peel faves The Stupids(who arguably were the main band that got Peel into the Uk hardcore scene) ENT hailed from Ipswich is a small town in Norfolk close to where John Peel lived, and he seemingly went out of his way to support his local bands.
The KLF - a big selling UK band of the time, famous for anarchic media stunts,became friendly with ENT and actually recorded an album of grindcore together with them called "the Black Room"- but shelved it before release.When the KLf were asked to perform at the annual Brit awards show, around 1992 or so, broadcast on primetime TV, they played with ENT onstage with them.
Posted by Digby at 12:52 PM