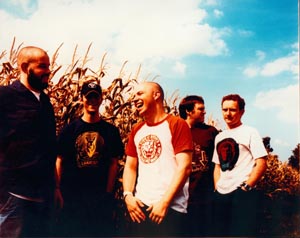 Question: Has earache ever considered signing mogwai or are they just fans of the label, in interviews when they are asked to name a playlist for a radio station they normally choose stuff ( such as on a recent bbc radio one regions broadcast for wales) like sleep, godflesh and napalm death as well as the more expected stuff like joy division and the cure. So did earache consider them or is it the john peel conection again From:

Answer:Nah- Mogwai never pressed the right buttons round here.I personally never got into them, tho if they are playing our bands on the BBC 1 Radio, then ,well, you can't fault their impeccable taste in noize can ya?they are good lads, tho they forgot about the best of the lot, and due a massive revival soon- Naked City.
Don't get me wrong tho-myself, the A&R bods,and even speaking for the Earache staffers in general,we're far from cliched dyed-in-the-wool blinkered metalheads, we're open minded about a ton of different music- so long as it caves yer head in, we like it.

Earache's bands all come from the street- Earache itself came from it (as opposed to say, a studenty/art school type background) and remains welded to it...so bands like Mogwai, or any such heavy bands with a strong artsy streak just don't register on our radar, i'm afraid.
Posted by Digby at 1:29 PM