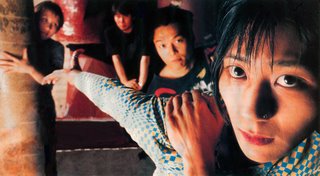 Question: im a collector of japanease extreme music bands such as sigh and melt banana and so on, i was wondering if earache had any interest in any of the bands from the region at all? being as import cds are so expensive and it would help that truely unique scene to grow From:

Answer: I have pretty old school tastes regarding extreme japanese bands- one of my first flexi-discs, pre-Earache, contained 2 crossover punk/metal acts from japan- namely, Lipcream and Execute, but thats about the only time we have released any japanese band.we should have done SOB in the early 90's but it didnt pan out.The truth is the latest wave of bands like Sigh and Melt Banana are not too interesting to us.Dunno why-- i think they are a little to artsy/weird/chaotic/random for our tastes actually.japanese bands like SOB,324,merzbow, Masonna, Gauze are my preferred listening.
Posted by Digby at 2:22 PM

how about this japanese band?