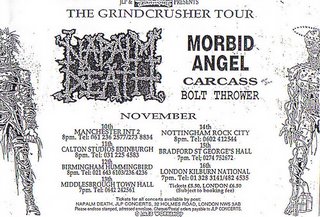 Question: since next year will mark the 20th anniversary of Napalm Death\'s Scum album, will Earache be considering re-issuing this album? I read somewhere that there was some expressed interest in this. it definitely needs it, especially a digitally remastered sound would be a great improvement. From: selfinduced@rcn.com

Answer: yes we are finally preparing to re-issue this classic piece of hate.Will include a full remaster job and an exclusive bonus DVD with interviews with Nik, Mick and Justin -yet to be filmed- getting their thoughts on the 20th anniversary of the recording of "scum". Should be a good way to re-introduce a new generation to the legendary album that kick-started extreme music and coined the grindcore genre.look for it early 2007.
Posted by Digby at 2:00 PM

Funny how Shane Embury slags the idea of this "cash in" re-issue online, when he didnt even play on the album and joined the band after its release- err, so what right has he to even comment?.
More to the point- Shane has cashed in on scum for his whole career, playing the songs live onstage for fans, songs that he never wrote or recorded in the first place...
For the record the album has never been out of print for 20 years, and is showing its age, sonically.