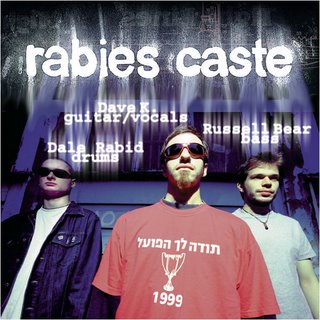 Question: Hey Earache. I wanted to know what happened with Rabies Caste and why there is no news from them? For me this is a true and totally heavy and innovative band, I wonder what are they doing nowdays. From: natasha_svetlova@mail.ru

Answer: Yeah i signed Rabies Caste after hearing the demo of whats was to become their "Let The Soul Out And Cut The Vein' album- it sounded totally fresh with great production- it was finally something new in heavy music! Earache released this one album by the Russian-Israeli 3-peice Sludgecore mob, but even tho it showcased the band's heaviness and originality, it failed to sell in significant numbers. Being based in Israel meant the band did not tour too often.
After the Earache split, the band took a couple of years to regroup, and have made a 7inch split with Sourvein and last month a new full length cd arrived.You can buy it for $8 here
Posted by Digby at 11:24 PM