DEICIDE IS BACK & DENOUNCING CHRIST NEAR YOU! 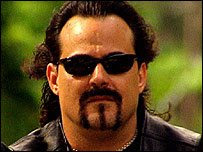 Question: What is the status of deicide at the moment, it appears to be up in the air? glenn gave that interview in terroizer where he said he was through with touring, following which steve\'s new band pops up. so have deicide split, gone on hiatus or are they doing other things as aparently vital remains are writing at the moment so its understandable that steve would do his own project whilst glenn is working with them. From:

Answer: Deicide is back and touring again, after Glen's enforced 18-month layoff from touring due to matrimonial/legal matters prevented his gigging.Now such matters are finished, Deicide are back on the road,and ready to slay audiences worldwide. First stop is Italian shows plus Australia and Japan also in the works.
Steve Asheim took the enforced downtime to create a new band ORDER OF ENNEAD, which has its debut on EARACHE on Oct 13.The new touring line up of Deicide includes Kevin Quirion from Ennead as guitarist, replacing Ralph Santolla, who has been ousted, and is in Obituary anyway.See DEICIDE on the following dates: