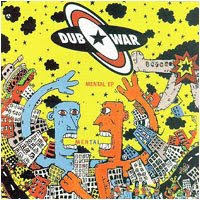 Question: So what actually went wrong with dub war surely they should have been one of the biggest bands in the uk? I was going through my ticket collection and i found a dub war ticket from when they played newport tjs support was from a second rate grunge band by the name of feeder, im sure they only got on the bill because like dub war they were from newport, over a decade later its feeder that are headlining festivals and are part of the uk rock hirachy surely it should been dub war who achived this? From:


Answer: Well this sort of thing happens all the time in the music biz- loads of bands dont get the breaks and the success their talent deserves while many others get big on little more than marketing and financial prowess of the well-financed, often Major label.Dub War always come up as a classic 'band who should have been big', but to be fair they did have a small slice of fame, charting 5 times in official Uk chart, but were not massive, far from it.In many ways the recent success of Skindred (Benjis new band, uncannily like Dub War, but now on major-backed US label Beiler Brothers) is the success Dub War didnt acheive, so things finally came good for Benji ten years after DW's demise.Drummer Ginge and Guitarist Jeff are ace producers now aswell, recording the bonus tracks for Bullet For My Valentine's new album.
It should be noted that Dub war's style and sound was incredibly radical for the time, playing a mash-up of ragga and metal whereas Feeder were grunge-lite and Skunk Anansie were female pop-rock, both highly mainstream in their outlook.the word mash up wasnt even coined until a few years ago, so you could say they were ahead of the time.
The main difference is finances- Feeder were on Echo - a powerful label backed with serious major- label-type money, Dub War were on Earache, backed by me, and we are as Indie as they come.
here's a look at Dub war playing Dutch festival DYNAMO from 1995: