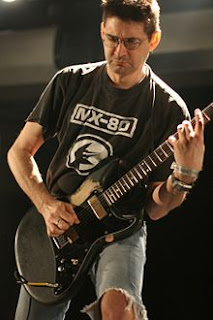 Question: Has earache ever considered signing a full blown noise rock/no wave band? the influence of steve albini on fudge tunnel and godflesh cannot be denied, speaking of albini wasnt he meant to have produced a godflesh album at one point? From:

Answer: Earache hasn't really been very interested in that scene, even at its height in early 90's- it wasn't to my taste, so didnt approach any of those bands.Its inflence was undeniabe tho- both Fudge Tunnel and Godflesh I know did have a slight soft spot for Jesus Lizard and AmRep acts like early Helmet,and Albini's 80s band Big Black was undoubtedly an influence on the early Earache bands,(but not Sonic Youth).Both bands also yearned for an altogether more HEAVY production- the aim was a totally crushing metallic production, Albini (pictured) had no metal credentials.It probably came up in conversation with those bands, that Albini might have been cool producer, but he was linked with another scene, and anyways Alex from FT decided to take more control of the recording of his band from Creep Diets onwards (he studied Colin Richardson's methodology on the recording of their debut).Nowadays Alex is a respected producer in his own right.Likewise Godflesh bought their own studio equipment and installed it in their house, so again, had intentions of doing their own productions, for better or worse.This meant that outside producers were never discussed anymore.
Posted by Digby at 12:38 PM

Regarding Albini's lack of metal credentials, check one of several Neurosis records he's done in the last eight or so years.

Having stood at the edge of the stage, blasted by the Neurosis guitar amps directly, I can say Albini nailed their guitar tone.

It's what the band sounds like and that happens to be metal (at least the loud parts).

But, yeah, this is more recent history. Albini probably wouldn't have been your first choice to record Carcass, though why not?