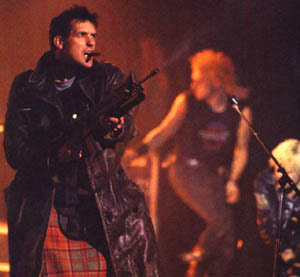 Question: Was earache skeptical when ent started to get involved with the klf? surely it doesnt do a scene who at that point trying to prove that they were proper musicans to asociate with two self described non musicans. I remember reading and essay written by jim from the klf titled \"how to fuck the music industry\" where he describes how ent had an issue with their plan to throw sheeps blood into the audience because of their vegan beliefs. isn\'t there another link between earache and the klf because of james fogarty and his inolvment in klf spin off blacksmoke? looking at the way that james has formed and anti label since leaving earache it seems as if he has followed the klf\'s members essays closely. From:

Answer: Yes that was a mad and tumultuous time, dont forget that the KLF had been number 1 in the UK charts and had a string of early rave/techno hits -they were a pop act- but being essentially serial pranksters- decided to 'leave the industry' with a bang by teaming up with Extreme Noise Terror to terrorize the public with a grindcore rendition of their rave hit 3am Eternal.Its mindboggling to watch now-yes this actually happened-don't forget that this is the UK's most prestigious Music awards ceremony "Brit awards" (comparable to the Grammys) live on TV in 1992:


I remember at the time ENT thought long and hard about being being invited to collaborate with the KLF, being good honest punks, their immediate instinct was to tell the preening pop pranksters to fuck off! But having had a few meetings with Bill Drummond, they gradually became seduced by the prospect of having a lucrative collaboration.The album they recorded, KLF vs ENT The Black Room never saw a release because the KLF had left the industry by then and shelved it, and I remember Dean (singer) telling me they were totally gutted about it, because they honestly thought they would become millionaires from it, this was-finally- their chance to hit pay-dirt and Bill Drummond just shelved it as a situationist prank.They felt deflated and somewhat used as a parting-shot gimmick by KLF.I don't think the band ever recovered from it.

As for James Fogarty & Ewigkeit- yeah when we started working with him, I had no idea he was already working off-and-on with Jim Cauty (ex- KLF) on the loose collective Blacksmoke project, they live near each other in Brighton I think, and from what James said, he did most of the day-to-day musical production work on the single and some remixes- tho Jim oversaw the overall direction of the project.
Ewigkeit made 2 incredible albums for Earache- Radio Ixtlan & Conspiritus- but even tho both were my albums of the year, they inexplicably failed to sell hardly anything.We put it down to Ewigkeits music was quite removed from the prevailing music scene trend and James failed to tour the band.At one point we did discuss Ewigkeit playing shows in Iraq to 'entertain' the troops, imagine that- Ewigkeit live in Baghdad would have been a blast!!!- it could have been the ultimate KLF-style prank to end em all, but it never got off the ground.
After we severed ties with him, James ended up 'doing a Radiohead' and symbolically severed his ties with the music industry by burning all his old record contracts (Earaches was merely the latest,he'd been in a loads of deals before aswell with lots of former bands, its quite a bonfire!)If you want KLF comparisons, thats it right there- KLF burned a million quid when they left the industry, Ewigkeit couldn't get their hands on those kinda readies- so burnt contracts instead. James is now releasing amazing politico Drum n Bass stuff on the internet under Bombs Of Enduring Freedom,the dude simply cannot write a bad song, its surely only a matter of time before the wider public catches up with his talents - then we might finally get to sell some Ewigkeit CDs!
Heres a mega-rare gig by Ewigkeit, including unreleased song Guantanamo Bay International, and on bass is up-n-coming Uk actor.