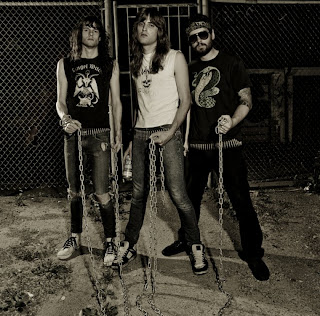 Question: Is there really a link between new earache signees cauldron and electro band crystal castles? From:

Answer: What- apart from both being from Toronto?
As it happens Jason Decay from our new Traditional HM signings CAULDRON (pic above) used to be in a metal band with the dude Ethan who is half of massively popular electro-punkers, and this weeks NME cover stars, CRYSTAL CASTLES (pic below). Mad eh?. 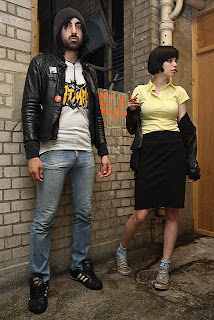 The prior band was called KILL CHEERLEADER which played punky-stooges/G'n'R metal and made an album on Spinerazor records in 2004.

CAULDRON is a newly formed 3 piece, a Traditional HM band influenced by NWOBHM,and the debut album will be unleashed on Earache in 2009.
See Goat Horn video below.

Crystal Castles is the only band outside of metal I listen to. They are legends in their field. Plus I would do anything to fuck that chick in the band.

I love extreme metal in all its forms, especially the open minded Mike Patton & Ipecac records bands.Crystal Castles have a punky attitude I like a heck of a lot.Cauldron sounds like a fun band, lets worship Lemmy and play NWOBHM fellas!!