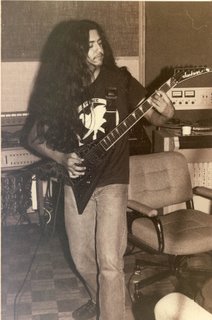 Question: I tried to get the free mp3 downloadable Jesse album from the site but it did not work?
From: steeobtq@yahoo.com

Answer: Sorry the server crashed the minute we announced the FREE downloadable album in memory of Jesse Pintado, i guess so many folks tried to get the album at the same time, it broke.2 days later we haven't fixed it..so i suggest you try ina few days time.

Regarding Jesse's passing, it was a total shock to myself and everyone it seems that he died so young..we hear it was liver failure, and his family were at his hospital bedside as he died in Holland last week.Jesse recorded for Earache both as Napalm Death and on the seminal, groundbreaking debut Terrorizer album (pictured above recording the album in 1989, and below with his band mates), during the late 80's-90's, but it must be over 10 years since I had a proper sit down chat with him,which I regret.Usually it was a quick "hi, how ya doing man?" grabbed between soundcheck and showtime.I can't claim to have been close,cos typically,everyone was so busy doing their thing to make time. 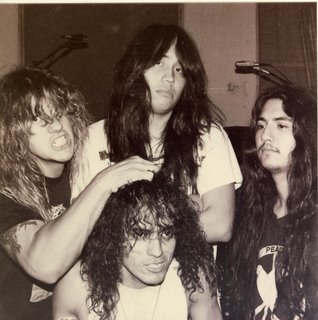 I'll fondly remember Jesse as a gentle soul-his stock reply was "I'm chillin' dude" or "just kicking back, man"in a friendly laid-back Californian way that always put everyone at ease, no matter what the situation.Musically he is responsible for being involved in the birth of grindcore with Terrorizer, thats a fact, and probably his genius work, his lasting legacy.
I sincerly hope he finally found the peace he sought.
Adios.