Carcass-are they taking the piss out of UK? 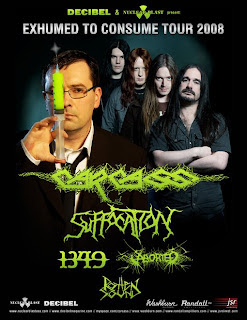 Question: hey do you see carcass only playing one uk date at a moderatly sized festival as a bit of a pisstake? I do in comparison to the fact that the US gets a full tour and they have played various festivals in europe. From:


Answer: Earache doesn't have anything to do with booking the revitalised Carcass' live shows by the way-we just do their CDs/DVDs- but judging from their upcoming gig list on the CARCASS MYSPACE it certainly looks very strange, and bordering on a piss-take to the UK fans.Like you, I can count 36 gigs upcoming- Full USA tour, New Zealand, Australia,Japan, even South Africa-oh and they also visit most countries in South America- and then the final show is a solitary paltry UK bash- at Leeds Damnation festival on November 22.

The band told me that when they reformed late last year, they approached several leading promoters and bookers because they were intending to play together for one summer only, and really just wanted to maximise income and make seriously decent money this time, because when the band were at their peak in mid-90's the metal scene live was so much smaller and less developed than it is now.They never really got paid their due because the income back then was OK but quite tiny by comparison to todays guarantees.Shockingly, the original band had never once played a festival for instance- Dynamo & Donington being the only regular 90s metal fests- just 2 per year-and some years they didnt run, so would be no festival in the summer at all! just imagine that! Whereas now there are metal fests big and small every weekend throughout the summer and Wacken just had 80,000 folks attend and witness Carcass last week.Nowadays live music is booming and fees paid for a performance are easily 10x the fee paid in the 90's.The internet, Mp3's, P2P and the iPod have made music so much easier to aquire and thousands of those kids will pay top dollar now to witness the live show aswell.Thats why everyone is reforming really.

Also they mentioned they would like to primarily have fun on this tour-to treat it like a summer long holiday jaunt, not as a slog- and part of the fun would be to visit interesting places in the world.The Uk didnt figure in their plans at all- because wheres the fun in playing their own backyard, and i also reckon the band fancied escaping the one place where they will be massively scrutinised and judged by Metal know-it-alls, ie their homeland, because they are hella rusty.
The fact that Leeds is the final show is significant i think- it really will be a final farewell and goodbye from Carcass,probably a massive party, maybe loads of suprises and i expect half the support acts- Napalm death, Pitch Shifter, The berzerker will come onstage as guests.Also I guess its probably the closest they could get to a Liverpool gig.So you could easily say the band are acting selfishly and ignoring the very UK fans who made their name and fame in the first place.But i say lets give the band the benefit of the doubt-its more poetic if they do a single farewell show here, so they can go out as they came in, controversially.
Until next summer when they might just do it all again.
Posted by Digby at 11:38 PM